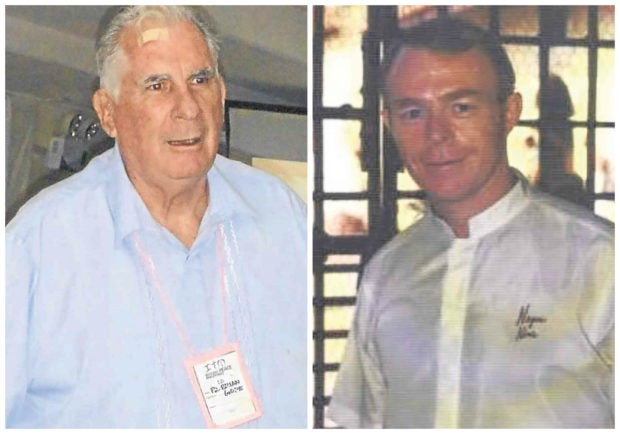 BACOLOD CITY — Two priests, an Australian and an Irish, who were detained on trumped up charges for the murder of a town mayor in Negros Occidental province in the waning years of the Marcos dictatorship, have been denied reparation and recognition by the Human Right Victims and Claims Board (HRVCB) for being foreigners.

Fr. Brian Gore, an Australian, and the heirs of Fr. Niall O’Brien of Ireland were denied their claims under Republic Act (RA) No. 10368 (Human Rights Victims Reparation and Recognition Act), an act that provided monetary reparation and recognition of victims of human rights violations during the administration of the late strongman Ferdinand Marcos, the HRVCB First Division ruled.

The HRVCB, an independent quasi-judicial body created under RA 10368, has approved reparation of about 11,103 claimants, but only about 6,000 are eligible for payment. In 2016, the board was granted a two-year extension to complete its task.

Gore, 74, told the Inquirer that he filed an appeal for himself and the heirs of O’Brien after receiving a copy of the HRVCB resolution on Jan. 17.

Gore, who lives at the Columban retreat house in Himamaylan City, said he would seek help from the Australian and Irish governments.

Gore and O’Brien had worked to uplift the lives of the poor, especially in southern Negros Occidental, for decades.

In its resolution, the HRVCB says RA 10360 categorically states that it is the policy of the state to recognize the heroism and sacrifices of all Filipinos who are victims of summary execution, torture, enforced or involuntary disappearance and other human rights violations committed during the Marcos regime from Sept. 21, 1972, to Feb. 25, 1986.

The law limits the reparation to Filipinos, it said.

But Gore said violations of human rights were universal regardless of nationality. He noted that their coaccused Filipinos had been paid partial indemnification for their arbitrary detention.

Gore, in a claim filed in the HRVCB, said he and O’Brien were arrested without warrants on Oct. 18, 1982, and were detained at Kabankalan City jail for rebellion charges. They were released three days later and the case was eventually dismissed on July 11, 1984.

On May 6, 1983, the two foreign priests, along with Fr. Vicente Dangan and six Filipino lay leaders, were accused of killing Kabankalan Mayor Pablo Sola and his three companions and were placed under house arrest. They were later transferred to Negros Occidental provincial jail.

In 1995, Vicente Pancho, a key witness, said he never found peace after falsely testifying against the priests and lay leaders to please a Philippine Constabulary official.

The HRVCB admitted that Gore and O’Brien had been arbitrarily detained during the Marcos dictatorship, but said it could not grant their claims due to their nationality.

But Gore, in his appeal, said: “To deny the claimants reparation and recognition for the violations of their human rights due solely to their foreign nationality would be to violate the universal character of human rights.”

In Manila, Zenaida Mique, executive director of Claimants 1081, a group of martial law survivors, said reparations must be made soon.

“Most of the claimants, especially the martial law survivors, are already old and are very ill. In fact, many of them have already died and would no longer be able to relish the compensation they were supposed to get for their struggles during martial law,” she said.

Mique said the group was looking at lobbying for an executive order or any measure to allow payment to all martial law claims.

Maria Cristina Rodriguez, executive director of Bantayog ng mga Bayani, the memorial for martial law survivors, said the four-year period given for the reparation of martial law victims was “too short.” — WITH A REPORT FROM MELVIN GASCON