In Pangasinan, only half of 44,000 barangay, youth candidates take drug tests | Inquirer News

In Pangasinan, only half of 44,000 barangay, youth candidates take drug tests 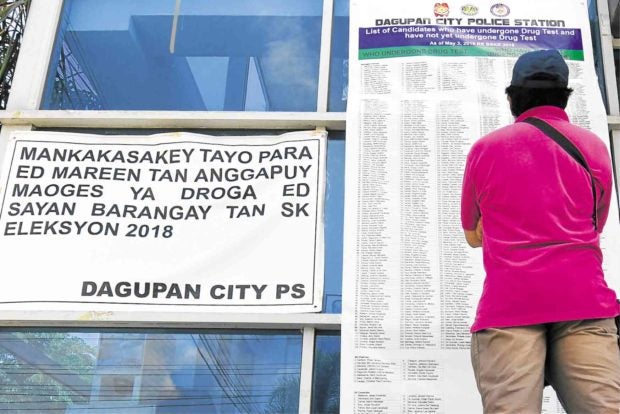 DRUG TEST CHECK A list showing who among barangay and Sangguniang Kabataan candidates in Pangasinan province have taken drug tests is displayed at the Dagupan City police station.—WILLIE LOMIBAO

CALASIAO, PANGASINAN — A long white tarpaulin, displayed at the police station near the town hall here, lists 329 candidates for the May 14 barangay and Sangguniang Kabataan (SK) elections who have submitted themselves to drug tests.

The tarpaulin also lists 469 candidates who have not taken any drug test.

But the tarpaulin has not attracted many voters. “The letters are too small. The names are not even alphabetically arranged and the candidates’ barangay are not indicated,” said Supt. Charlie Umayam, Calasiao police chief.

The candidates in the list are among the 44,159 who are aspiring for different positions in 1,364 villages in Pangasinan province.

The police also suggested displaying the same list at the barangays, as well as in polling centers.

None of the candidates, who failed to undergo drug tests, is being labeled as drug traffickers and substance abusers. Umayam said their names would be stricken out once they take the tests supervised by the police crime laboratory.

“The drug testing was voluntary. So, I do not see anything wrong,” said Marino Salas, Pangasinan election supervisor. In the Ilocos region, only one candidate tested positive for drug use, he said.

Salas also said 296 drug suspects who had surrendered were among the candidates.

According to Lee, 121 incumbent barangay officials and 242 candidates are on the police drug watch list.

Lee said 289 candidates had surrendered or deposited their firearms with the police, while 89 others had allowed the police to muzzle their guns with tape. — REPORTS FROM GABRIEL CARDINOZA AND YOLANDA SOTELO