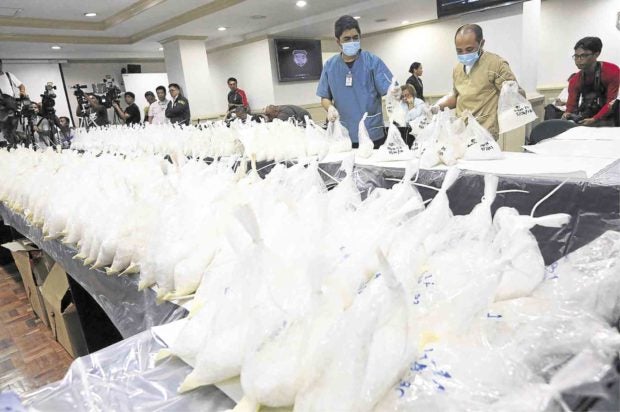 The 602.2-kilo “shabu” shipment is presented at the National Bureau of Investigation on May 29, 2017, after its discovery in two warehouses in Valenzuela City. INQUIRER file photo / Marianne Bermudez

The court granted the motions on the ground of forum shopping.

Melicor said that the prosecution’s move “clearly bears the hallmarks of forum shopping” and “betray [their] intent to secure favorable judgment from different courts.”

Forum shopping happens when a case is filed in two separate courts in hopes that one of them will rule favorably.

The Valenzuela court noted that a drug importation case is already pending in Manila with the same set of accused and based on same arguments.

“Filing a case for importation in Manila after the court in Valenzuela City has dismissed an earlier case for importation for lack of jurisdiction, and then filing another case, this time for transportation, before this court involving the same accused and based on the same facts, issues and arguments, clearly bears the hallmarks of forum shopping,” read Melicor’s decision made public on Thursday.

“From the point of view of the conspiracy to import the subject shabu, it may be said that the transport and delivery to the Hong Fei warehouse was a mere part of a series of acts to execute their shared design to import shabu,” it added.

She explained that the crime of importation of dangerous drugs was already consummated when the drug shipment arrived at the Manila International Container Port (MICP) on May 15.

Another importation of drugs case filed in November last year against the same suspects is pending at the Manila Regional Trial Court.

The case stemmed from the Bureau of Customs’ (BOC) discovery of the shabu shipment at the Hong Fei Logistics warehouse in Valenzuela City on May 26, 2017 based on a tip from the Anti-Smuggling Bureau of the China Customs.

The shabu shipment managed to enter the country through the BOC after being declared as kitchenware, footwear and moldings.

The DOJ found probable cause to indict for importation of dangerous drugs under Section 4, in relation to Section 26 (a) of Republic Act No. 9165, the Comprehensive Dangerous Drugs Act of 2002. /jpv