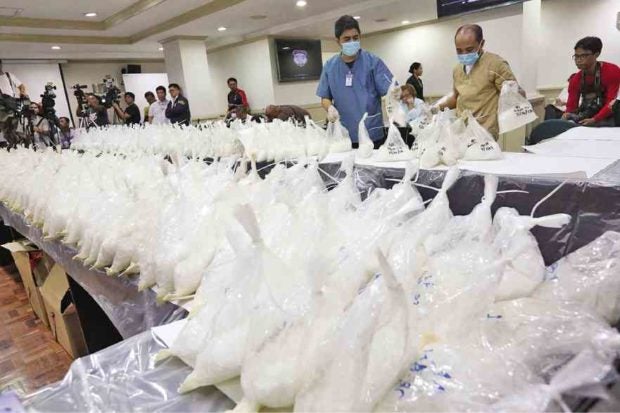 The Manila Regional Trial Court (RTC) Branch 46 on Friday rescheduled the arraignment of the accused in the controversial P6.4 billion shabu shipment case.

During the hearing, Judge Montesa allowed defense lawyers to file their motions for reconsideration after three of their motions—a motion to suppress evidence, a motion to quash the charges, and a motion to defer arraignment—were denied.

Only Mark Ruben Taguba II, a fixer at the Bureau of Customs, and Eirene May Tatad, the owner of EMT Trading, were the only accused present at the hearing.

The Department of Justice found probable cause to indict Taguba, Tatad and 10 others for violating RA 9165 or the  Comprehensive Dangerous Drugs Act of 2002.

Taguba and Tatad have been detained at the Manila City Jail since February following their surrender to the National Bureau of Investigation (NBI).

It was Taguba who tapped Tatad’s trading company to serve as the importer or consignee of the shabu shipment from China.

Both Taguba and Tatad have maintained their innocence, stressing that they had no knowledge of the actual contents of the shipment when it passed through the Bureau of Customs’ (BOC) “express lane.”

Shipments that pass through the “express lane” are not subject to any x-ray check or inspection. This led to a series of congressional inquiries, which put the spotlight on the widely practiced “tara” or payola system at the BOC.    /muf

Read Next
Aguirre resigned due to public’s loss of trust in him – official
EDITORS' PICK
vivo gives users more reasons to claim #MemoryIsPriceless
Luzon folk flee as LGUs raise alert for Karding
Okada Manila is truly back to business as usual
House energy committee chair Arroyo bats for cheap electricity
Chinese-Filipino group backs ban on POGOs
Luzon, Metro Manila bear brunt of Karding’s impact
MOST READ
#WalangPasok: Suspended classes due to habagat, September 20, 2022
LOOK: Erika Rae Poturnak, Kobe Paras kiss and cuddle in her birthday greeting to him
Classes suspended in some areas in Luzon due to ‘habagat’
LPA may form east of Luzon, says Pagasa
Don't miss out on the latest news and information.