Witness vs Espinosa: Inconsistencies in statements due to translation inaccuracies | Inquirer News

Witness vs Espinosa: Inconsistencies in statements due to translation inaccuracies 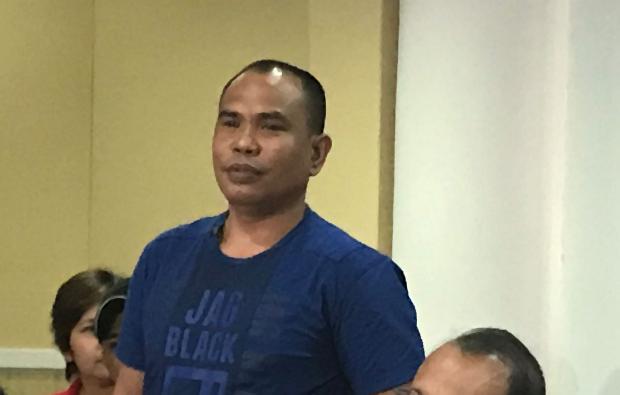 Marcelo Adorco, former driver and associate of Kerwin Espinosa, submitted another affidavit to the Department of Justice on Monday, April 30, 2018. (Photo by TETCH TORRES-TUPAS / INQUIRER.net)

Marcelo Adorco, former driver and associate of self-confessed drug distributor Kerwin Espinosa, said on Monday there were inconsistencies in his previous affidavits because some of his statements got lost in translation.

Adorco was the lone witness of the Philippine National Police-Criminal Investigation and Detection Group (PNP-CIDG) when it first initiated the complaint against Espinosa, Cebu-based businessman Peter Go Lim, convicted drug lord Peter Co and several others.

The complaint was dismissed, however, because of inconsistencies in Adorco’s affidavits as well as the failure of the police to submit supporting evidence.

In the December 2017 resolution, the DOJ noted the inconsistencies of Adorco:

In his latest affidavit submitted Monday, April 30, to the Department of Justice (DOJ), Adorco said he was asked questions in Waray, one of the languages in the Visayas region, and he responded in Cebuano (also commonly called Bisaya by its speakers), another language.

[There were similar questions propounded to me with different translations. There were questions in Waray which I answered in Bisaya but the translation was wrong.]

In his recent affidavit, Adorco corrected the inconsistencies mentioned in his first three affidavits.

He clarified that the transaction with Co at the Metropolitan Hospital was from 2012 to 2014 as stated in his first affidavit.

He also confirmed that he and Espinosa met Peter Lim in Thailand in 2015, not 2014

Adorco even submitted a mug with a picture of Espinosa, accompanied by his two children, as proof that they were in Thailand in 2015.

The DOJ panel of investigator gave the camp of Lim, Kerwin and the other respondents up to May 15 to submit their counter-affidavits. /atm