Sister Foxy, ‘undesirable alien,’ in her own words 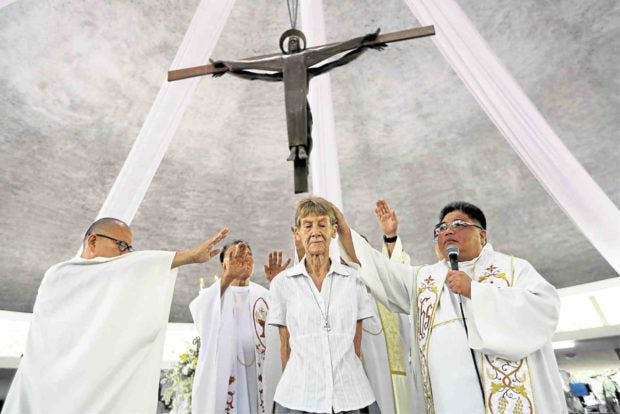 Sister Patricia Fox: I can’t see the point of being a missionary and laying low. It is a part of our Christian calling to speak the truth. Photo by Ma. Ceres P. Doyo

Sister Patricia Ann Fox of the Sisters of Our Lady of Sion has been in the news almost daily in the Philippines since her arrest on April 16 by Bureau of Immigration (BI) operatives for allegedly engaging in political activities. She was released the following day.

Fox, 71, an Australian citizen and a lawyer by training, has been working in the Philippines since 1990.

The day after Fox’s arrest and detention, President Rodrigo Duterte’s spokesperson, Harry Roque, said it could have been all a mistake.

But a few days later, the President himself revealed in a public speech that he had ordered Fox’s arrest and detention because, he said, she had joined political activities and spoke against the government.

The case of Fox brings to mind the deportation of foreign priests during the martial law years under the dictatorship of President Marcos from 1972 to 1986.

Fox was the first religious missionary to be investigated since then.

On April 23, the BI revoked Fox’s missionary visa and gave her 30 days to leave the country, citing “activities not allowed under the terms and conditions of her visa.”

In a statement on April 25, Fox said she thought she had 10 days to present a counteraffidavit.

She said in the statement: “As a Christian, believing that our mission is to bring God’s Kingdom to the here and now, I couldn’t help but get involved  both with projects, such as training in organic farming, to uplift the livelihood of the farmers, but also to advocate with them for their rights to land, livelihood, peace, justice and security, all universal human rights which the church sees as integral to her mission.

“Whatever happens, I will be forever grateful to all those Filipinos that I call my friends and for all those from both church and sectors who have supported me through this time. I may lose my right to be in the Philippines but I can never lose the learnings and beautiful memories.”

Below are excerpts of my interview for the Global Sisters Report conducted in Fox’s Quezon City home on April 22. Fox, sometimes nicknamed “Sister Foxy” by friends, is a familiar face in the middle-class neighborhood. Neighbors, associates and friends, as well as tricycle drivers were surprised to learn about her case.

Doyo: You arrived in the Philippines in 1990, four years after the 1986 Edsa People Power Revolution that toppled the dictator Marcos and swept Corazon Aquino to the presidency. What was the Philippines like for you then?

Fox: We came upon the invitation of four bishops. It was quite adventurous in those days, as transport wasn’t as easy. We chose to go to the Prelature of Infanta [southeast of Metro Manila], as the prelature statement gelled with our reason for coming. Everything was new in this different culture. We were used to a verbal culture and not the unspoken messages.

Doyo: Did you choose the Philippines, or was it an assignment?

Fox: In our 1986 congregational chapter, we were called upon to see the world through the eyes of the poor. One of the decisions was to explore an immersion in Asia, where we had no presence and where the majority of the world’s population lives. We chose the Philippines, and I volunteered.

Doyo: Where were you before you came to the Philippines?

Fox: I was an elementary school teacher and a community worker. But immediately before I came here, I was working as a lawyer in a community legal center in Melbourne, Australia.

Doyo: What do you consider important events, milestones and experiences as a religious living and working in the Philippines?

Fox: I think my experience of living closely with the poor and their acceptance of me and willingness to tolerate my faux pas and being ever ready to help. I have learned how to analyze society from their perspective.

Doyo: Where in the Philippines are you and your sisters present, and what type of ministry do you do?

Fox:  In Real, Quezon, the sisters are involved in a women’s livelihood cooperative and a Grameen banking program called “Kumare.” We are also involved with the catechists and youth of the parish.

In Manila, one sister is studying nursing and another is just finishing religious studies. Another has been teaching in an urban poor kindergarten while finishing a doctorate on social transformation. Another sister tutors in Hebrew and team teaches on biblical studies. I am more involved in peasant advocacy and promoting organic farming.

Doyo: You were coordinator of the Rural Missionaries of the Philippines from 2000 to 2007. What was it like for you?

It was a great experience to get to know the farmers, fisherfolk and tribal people from various parts of the country. It was great to be with the religious and laypeople who were helping organize them for their rights and working in solidarity with them. It was and is a challenge to make these issues integral to the local churches as called by the Vatican II document “Justice in the World.” It was also very humbling how I was accepted and not considered a foreigner!

Doyo: You speak Filipino. How good are you at it?

Fox: I speak it with an Australian accent and describe my Tagalog as “kangaroo Tagalog” as against “carabao English”! But I understand enough and can communicate with people.

Doyo: You are the first foreign religious to be singled out and investigated for alleged political interference. What particular activities have you participated in that you think put you on the intelligence radar?

Fox: The immediate trigger was my participation in an international fact-finding and solidarity mission [to check on reported human rights violations] from April 6 to 9 in Davao.

Doyo: Describe how the immigration agents came to your residence to take you away.

Fox: There were six BI agents who came to my door, one female and five male. They were dressed in uniforms and said they had a mission order for me to accompany them to the BI to clarify some things. I asked if it could be the next day, as no one was in the house with me, and also if I could collect my passport from the travel agent if I needed it. [Fox’s travel agent had her passport because Fox had planned to visit Australia in May.] They insisted that it had to be that day.

Fortunately, one of my sisters arrived from Real, and she accompanied me. A mission order was flashed at me, but I had no idea what it meant. I had no worries about clarifying any questions, so I went with them. They treated me OK.

Doyo: What activities of yours did they cite that made you worth investigating? Did they say who ordered them to investigate?

Fox: It was supposedly joining rallies. One picture was a visit to political prisoners and the other was attending and speaking at an outdoor press conference with Coca-Cola workers who had been dismissed.

Doyo: Now your having joined a rally of farmers at Hacienda Luisita in Tarlac province some years back is being brought up, that you were arrested. Is this true?

Fox: Again, it wasn’t a rally. It was after the Department of Agrarian Reform had implemented the decision of the Supreme Court to distribute the land. There were a lot of anomalies with farmers being given lots far from their houses, being taken to financiers to rent their land. We had a fact-finding mission and had just come from a dialogue with the military when the police came and started arresting people. Some of us went with them. (We) were not charged, but we stayed with the (farmers) until they were released.

Doyo: Do you consider your ministry among the marginalized political?

Fox: In a way, all our activities (are) political, but not partisan political.

Doyo: Would you advise other foreign missionaries to lie low, not to be involved in human rights work?

Fox: I can’t see the point of being a missionary and laying low. It is a part of our Christian calling to speak the truth.

(For the complete interview, visit http://globalsistersreport.org/blog/q/ministry/q-sr-patricia-ann-fox-facing-deportation-philippines-53451.)