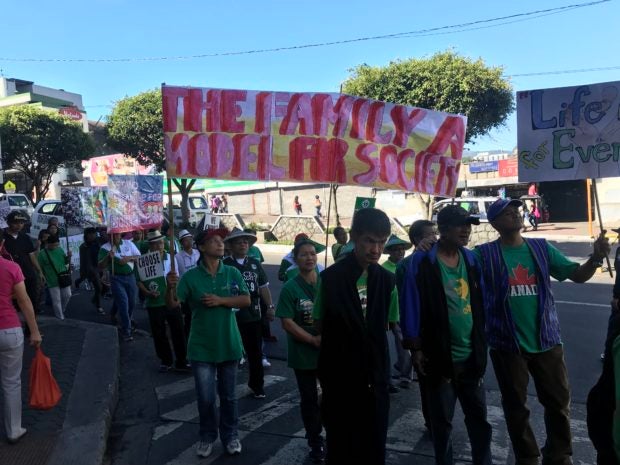 More than a thousand Catholic faithfuls and students on Saturday (April 28) march along downtown Baguio to protest a divorce bill pending in Congress. The group converge from four local churches at 8 a.m. Inquirer Southern Luzon / photo by Vincent Cabreza

The protesters, among them students from Catholic schools and senior citizens walked in formation near the sidewalks from four local churches, and converged at the University of Baguio gymnasium for a Mass led by Baguio Bishop Victor Bendico.

The groups expressed their objections to House Bill No. 7303, the divorce bill which passed its third reading, saying it was the kind of legislation that harms the integrity of Filipino families.

They also denounced killings committed against suspected criminals. The widow of a drug suspect, who was murdered at their home, spoke at a program here about the “inhumanity of his killers.”

“We are not here to incite rebellion… but to incite love [and to] ignite our common responsibility to protect life, high morals, marriage and faith,” said lawyer Ramon Bayan of the Commission on Family Life. /jpv