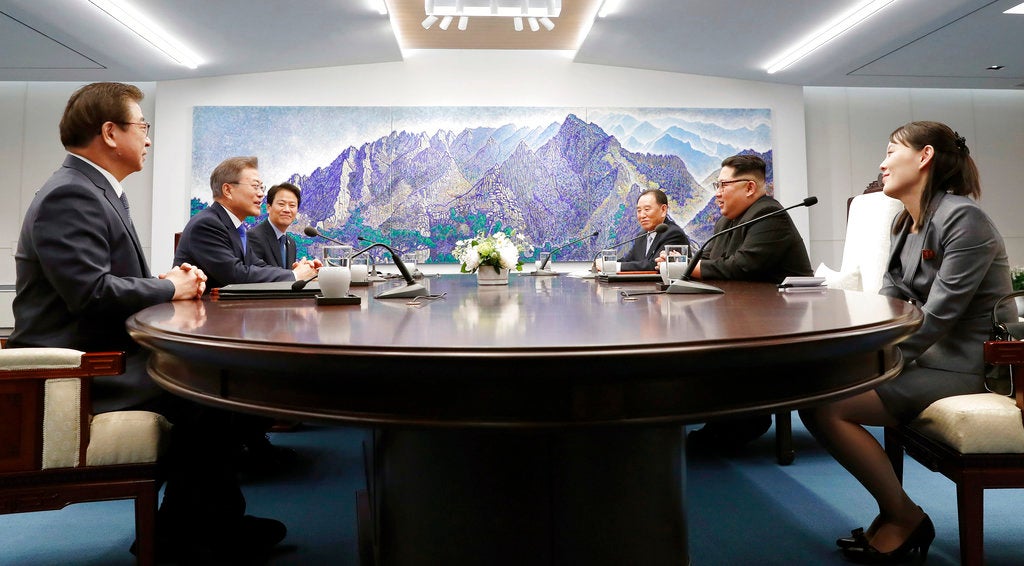 North Korean leader Kim Jong Un, second from right, talks with South Korean President Moon Jae-in, second from left, during a meeting inside the Peace House at the border village of Panmunjom in Demilitarized Zone Friday, April 27, 2018. Their discussions will be expected to focus on whether the North can be persuaded to give up its nuclear bombs. At right is Kim’s sister Kim Yo Jong. (Korea Summit Press Pool via AP)

GOYANG, South Korea – North and South Korea have agreed to stop all hostile acts over “land, sea and air” that can cause military tensions and clashes, after a summit between their leaders at a border truce village.

North Korean leader Kim Jong Un and South Korean President Moon Jae-in announced Friday that starting May 1 they will suspend all loudspeaker propaganda broadcasts the countries have been blaring at each other across their heavily-armed border. They will also dismantle broadcasting equipment.

The Koreas also agreed to stop flying propaganda leaflets across their border.

The countries also agreed to take steps to defuse the relatively frequent clashes around their western maritime border by designating the area as a “peace zone” and guarantee safe operations of fishermen from both countries.

The Koreas plan to hold military talks in May to further discuss reducing tensions.