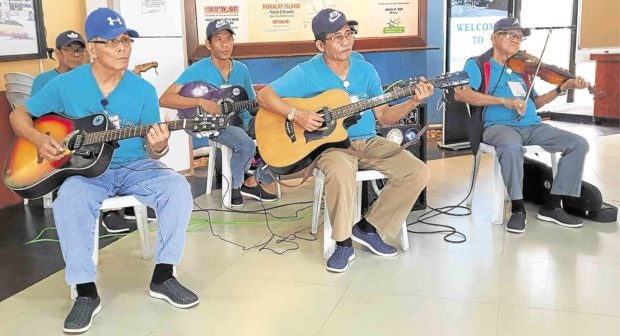 AS BORACAY SINKS In a scene that evokes a movie image of musicians who continued to play in the Titanic as the mammoth ship sank, elderly musicians, who rely on tourist donations, continued to play at the jetty port of Caticlan village, jump-off point to Boracay which would close down on April 26.—NESTOR P. BURGOS JR.

BORACAY ISLAND, Aklan — While tourists swam and sunbathed at the White Beach a few meters away, resort owner Christopher Jude Lee met with his employees at the lobby of the Hey Jude South Beach resort here.

No one was smiling as employees listened intently to Lee discuss plans for Boracay’s closure to tourists starting on April 26.

Lee would have to close his two resorts but would keep a skeletal force of 58 employees.

The meeting was about who’s in and who’s out.

During the lock down, Lee planned to continue paying his employees at least P2,000 a month each.

Those who would be asked to stay behind would work 10 days a month and get two free meals a day.

Employees who would remain as part of the skeletal force would be allowed to stay in the resorts for free to save on lodging expenses.

Contributions to Social Security System, PhilHealth and PagIbig would continue.

The cut in pay was sharp but Lee said it was necessary during the closure as he expected his resorts’ income to fall as well.

Lee said everyone was resigned to the island’s closure.

“We are trying to make the most of it,” he said.

But lack of a comprehensive plan and the tentativeness of the duration of the closure were making it difficult for business owners to plan.

“I really have not even computed how much exactly will be our losses,” said Lee.

Bookings in his resorts, he added, had started to decline in March when the closure was first announced.

But Lee said he was in a better situation than other business owners on the island.

“I am really getting a big hit but a lot of people are losing everything,” he said.

Some of his neighbors along Bulabog Beach at the eastern side of the island would have to demolish structures within 30 meters of the shoreline.

“They were given permits when they put up their houses and hotels and now they were told they have to demolish part or whole of the buildings,” Lee said.

“A friend invested his life savings to buy a condominium unit as his retirement home but the building is at risk of being demolished,” he added.

Lee’s meeting with his employees was being replicated around the island as some resorts were closing ahead of schedule.

The Department of Labor and Employment in Western Visayas said it would provide emergency employment to at least 5,000 workers.