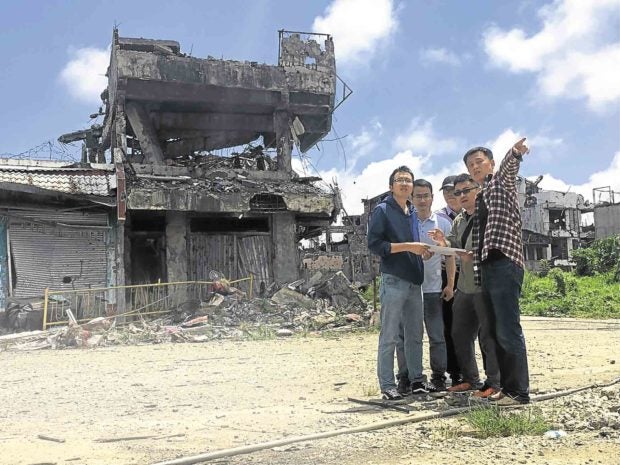 Technical specialists from a Chinese company offering to take part in the rehabilitation of Marawi City survey the devastation left by the fighting between government and Islamic State-allied militants last year. —ARLYN DELA CRUZ-BERNAL

MARAWI CITY — A Chinese company engineer who visited what used to be the main battle zone in this Islamic city shook his head in disbelief at the devastation around him.

“I feel sorry for what happened here,” said Lee Wang, an engineer from one of the Chinese companies being eyed to take part in the rehabilitation of Marawi.

Wang was one of the six technical specialists allowed by Task Force Bangon Marawi (TFBM) on Saturday to conduct a ground survey of the areas most affected by the five-month-long war last year.

The specialists, the third foreign group to visit Marawi, took pictures of the buildings destroyed in the fighting, measured roads and exchanged notes while soldiers stood guard.

“This is a lot of work and there is a specific target of completion but we are ready to help the Philippine government,” said a senior Chinese engineer assigned to design roads and bridges who declined to be identified. “This is a big challenge but we can do it.”

The Chinese team of engineers is part of the Bagong Marawi Consortium earlier identified by Eduardo del Rosario, TFBM chair, as the private sector entity that submitted an unsolicited master plan for the development and rehabilitation of Marawi.

The development contract has not been awarded to the consortium but it has been allowed to survey and inspect the area most affected by the war. The consortium is led by a Filipino management company but is composed of five Chinese companies, including China State Engineering Corp. Ltd.

Demolition and debris management would be the initial task in the rehabilitation work, said HUDCC Undersecretary Falconi Millar.

“We are estimating 15 million tons of debris and our requirement to the potential developer is to complete that task in six months,” Millar said.

Millar said President Duterte had given TFBM a specific deadline to complete the rehabilitation and rebuilding of Marawi.

Del Rosario said they had 33 months to finish the work from the date of the groundbreaking.

“President Duterte wants that when the Maranao return, they would be still returning to Marawi, but better, a better place to live in,” he said.

About 25 hectares of Marawi had been reduced to rubble by the fighting between government forces and Islamic State-allied militants, who laid siege to the city on May 23 last year. About 12,000 families, or around 60,000 individuals, used to live in what was the main battle area. 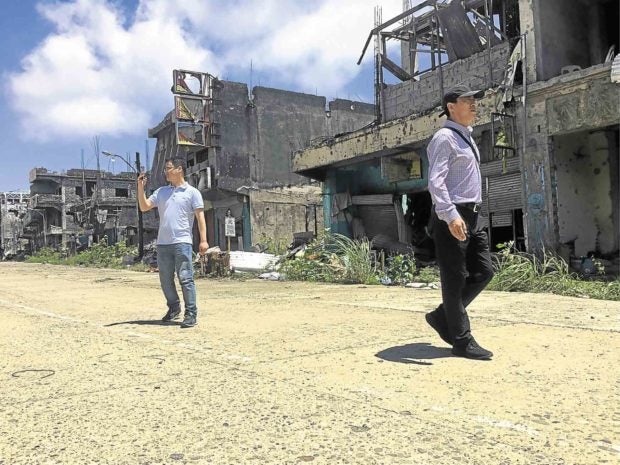 A member of the technical staff of a Chinese company takes pictures of Marawi’s former main battle area while his colleague looks at the devastated buildings. —ARLYN DELA CRUZ-BERNAL

TFBM and the consortium have conducted more than 20 consultations with various stakeholders in Marawi. The consultations would continue for another two weeks.

“We want to make sure the Maranao are not outsiders in the plan. This is their city and they have a say on the master plan for Marawi,” said Harry Cuevas, consortium manager.

The consortium proposed to undertake the rehabilitation and development of the war-torn city at a cost of P17.1 billion, but Del Rosario said this cost could still go up, depending on the final plans.

TFBM will choose the proponent by the end of April, after which the task force would publish the proposal and open it to a Swiss challenge.

The contract could be awarded by June, and after this, the work would begin at once. TFBM is targeting June 7 as the date for the groundbreaking ceremony.

“The President does not want photo ops. He wants groundbreaking, all the equipment in place and work to start immediately,” Millar said.