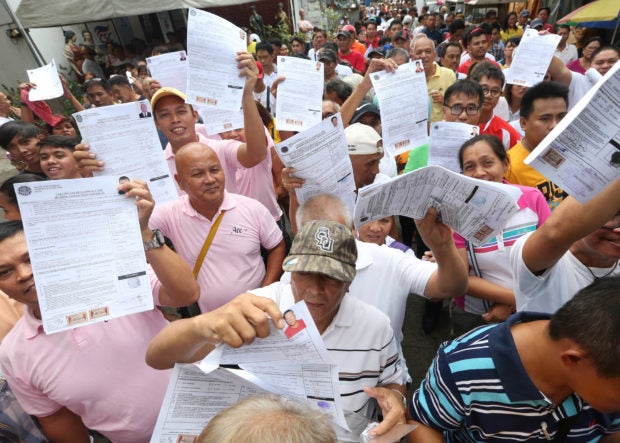 Candidates for barangay and Sangguniang Kabataan positions pack the Comelec office in Manila for the filing of their COCs. INQUIRER file photo / MARIANNE BERMUDEZ

The Commission on Elections (Comelec) on Saturday announced it would continue to intensify voter’s education initiatives in light of the outcome of the simulation of the 2018 Barangay and Sangguniang Kabataan (SK) elections.

During the vote counting phase of the simulation on Saturday, election officers observed that some voters had mixed up ballots for barangay polls and SK polls.

Election officer Anna Abella said that this was evident among voters who were eligible to vote for both the barangay and SK polls.

Around 100 voters, including youth and senior citizen voters, participated in the mock polls, according to Comelec.

(If you are 18 to 30, you can vote in the SK and barangay. If you are 17 and below, you can only for in the SK. I informed them already, it has been posted on the board.)

(Still, they are still confused. The ballots for the barangay were being put in the SK.)

Misplaced votes, election officers said, would not be counted.

In a press conference after the simulation, acting Comelec chairperson Al Parreño said they would bolster voters’ education and training to avoid such mistakes on the actual day of election set on May 14.

(There was an issue in the 18 to 30 years old, on how they handle the ballots. There was an instance the voters commit mistakes that they vote SK in the ballots intended for the barangay, and vice versa.)

Under the guidelines, voters aged 15 to 17 were only be given SK ballots, while those aged 18 to 30 were given two ballots—one for SK and the other for Barangay—since they were eligible to vote for both polls.

Meanwhile, voters aged 31 and above were only given Barangay ballots.

Election day for the Barangay and SK polls was set on May 14, while the campaign period will start on May 4. /jpv