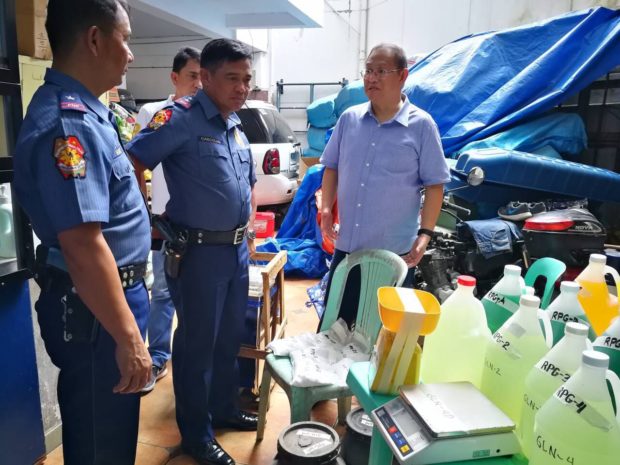 Police have yet to link the chemicals seized during a raid in a house in Barangay Nangka last Friday to the manufacture of shabu and ecstasy, Supt. Roger Quesada, Marikina City Police chief said on Saturday.

The raid was headed by Quesada who was supported by elements of the Marikina City Police station’s Drug Enforcement Unit, Station Intelligence Branch, and the Philippine Drug Enforcement Agency (PDEA) Eastern District.

The raid was conducted thru the strength of a Search Warrant No. 2018-84-MK issued by Honorable Anjanette N. De Leon Ortile, Executive Judge RTC Branch 156 Marikina City to search the house of John Ming Shen a.k.a. Mocario Lim a.k.a Jiang Yonyuan,” Quesada said in a release on Saturday

“The raid was in connection with the recent anti-illegal drug operation conducted in Batangas and Malabon City on April 13 and 14, 2018 and busted a drug laboratory owned by the suspect. The clandestine laboratory was used to manufacture shabu and ecstacy,” he added.

On April 12, agents from the Philippine Drug Enforcement Agency (PDEA) raided the shabu laboratory inside a farm in Batangas province.

Two alleged Chinese chemists and their Filipino cohorts were arrested during the raid.

The PDEA also raided another shabu and ectasy laboratory in Brgy. Tinajeros, Malabon.

Arrested in the raids were members of the Hong Kong-based Dragonwood syndicate.