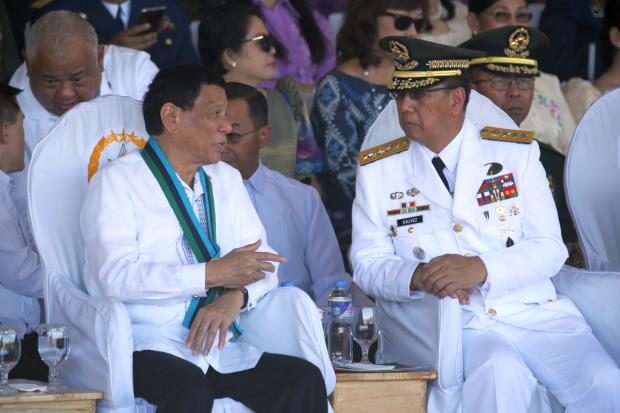 For the first time, leaders of secessionist movements in Mindanao attended the change of command ceremony at the Armed Forces of the Philippines (AFP) headquarters, recognizing the efforts of the newly installed military chief, Lt. Gen. Carlito Galvez, to forge peace in the country’s war-torn region.

Galvez took over as AFP chief of staff from retired Gen. Rey Leonardo Guerrero, whom President Duterte had appointed to head the Maritime Industry Authority (Marina).

Galvez was commander of the Western Mindanao Command when the Islamic State-inspired Maute Group and a faction of the Abu Sayyaf terrorist group took over Marawi City.

The President also cited the “unparalleled number” of surrendered communist insurgents and terrorists during Guerrero’s tour of duty, “from less than 800 prior to his assumption (of office) … to more than 5,000.”

Read Next
Pagcor: Galaxy hasn’t backed out of Boracay
EDITORS' PICK
CPA Australia and their designation: Advance your career
Four ‘Gubat sa Ciudad’ guests test positive for COVID-19
Marian Rivera partners with JC to boost public health awareness
Finance for all: GCash helps trike drivers and vendors cope with the pandemic
Pagasa: Metro Manila heat index may reach 39 to 41 degrees Celsius
Rabiya Mateo ends her Miss Universe journey in Top 21
MOST READ
Most of PH would still have hot weather, but ITCZ to affect Mindanao
Duterte downplays PH’s arbitral win vs China again, branding it as ‘meaningless’
1Sambayan in talks with 2 to 3 more possible candidates for 2022 polls
PH Red Cross to offer Moderna’s COVID-19 jab for P3,500 per 2 doses – chairman
Don't miss out on the latest news and information.