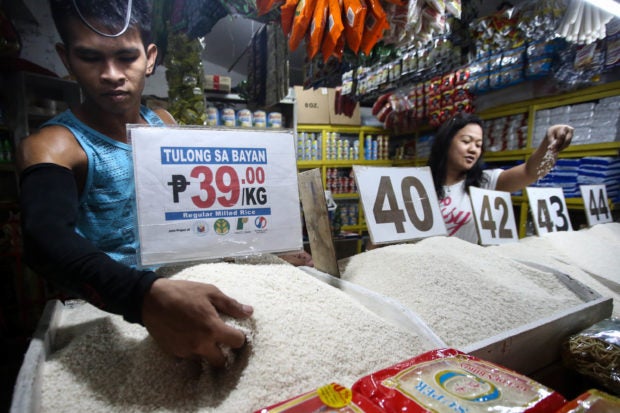 SUBSTITUTE FOR NFA RICE Commercial rice from Nueva Ecija millers is sold by retailers at Barangay Commonwealth in Quezon City as substitute for NFA (National Food Authority) rice. Consumers, however, say the rice is yellowish compared with other commercial rice. —JAMSTA. ROSA

President Rodrigo Duterte has ordered an increase in the buying price of the National Food Authority (NFA) for paddy rice (palay) despite opposition from his economic managers.

In a post on Facebook on Tuesday, Agriculture Secretary Emmanuel Piñol quoted the President as saying during the Cabinet meeting on Monday that the increase could boost the NFA’s buffer stock, which was wiped out earlier this month.

“He did not like a repeat of what happened recently when the country’s rice agency went low on its buffer stocks whichever led to a spike in the price of commercial rice in the market,” Piñol said.

“Buy from the Filipino farmers first and if you could not find sufficient stocks to be bought at the price approved by the NFA Council, that’s the time you source it through importation,” Piñol quoted Mr. Duterte as saying.

At present, the NFA’s buying price for clean and dry palay is P17 per kilogram, with additional incentives of P0.20 to P0.50 per kg for delivery, P0.20 per kg for drying, and P0.30 for palay sold by farmers’ organizations and cooperatives. This is the last price adjustment since 2009.

The price is lower than prices offered by private traders to farmers, averaging P20 per kg, according to the latest price report of the Philippine Statistics Authority.

Piñol said he wanted to increase the NFA buying price by P3, which would help the agency compete with private traders. The proposal is supported by industry groups, including Samahang Industriya ng Agrikultura and Bantay Bigas.

But according to Mercedita Sombilla, assistant secretary for National Economic and Development Authority and a member of the food security committee tasked to study such proposals, an increase in the NFA’s buying price would lead to “relatively huge price inflation.”

Read Next
Evasco out as head of NFA Council
EDITORS' PICK
House energy committee chair Arroyo bats for cheap electricity
Reignite your passion with the vivo Y35
Individuals affected by ‘Karding’ now over 157,000
Karding damage to infrastructure at P23M
Bongbong Marcos says PH ‘open for business’ with new Clark Airport terminal
Newbie gamers are in for a treat with the power-packed feature of vivo Y16
MOST READ
LPA enters PAR, may develop into tropical depression
Angelica Panganiban ‘duguan, sugatang mom’ one week into breastfeeding
Soldiers are not errand boys, Tulfo tells defense officials
Charges readied vs gov’t guard with P290-M deposits
Don't miss out on the latest news and information.