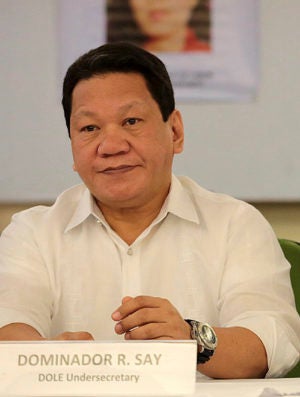 Labor Undersecretary Dominador Say has resigned apparently to spare Labor Secretary Silvestre Bello III the trouble of fending off accusations that he sided with employers in the debate over contractualization.

“I’m not promanagement. Let me clarify that. I was mistaken to be one and this has been affecting Secretary Bello. He was being criticized,” Say said in an interview with reporters.

“I also have friends in the labor sector,” he added.

Say, who was labor undersecretary for policy, employment and regional operations, said he encountered difficulties on his job.

“I’m a lawyer so when I design policies I stick with legalities,” he said.

Say noted that the law allowed contracting. “There is no question about it. If you read the law, it is there.”

He said his friends in the labor sector were not disputing that. “But they said the same law provides that the secretary of labor has the power and prerogative to stop contracting. But that is not the interpretation.”

Say explained that sometimes he was perceived to be siding with management because of the way he presented his views.

He lamented that some sectors perceived Bello as promanagement because the labor secretary was very “soft” toward employers.

“Some people are saying that because of the policies we implement. So to spare him from the unwanted attention and unwarranted imputations, I just decided to step back and give the secretary the elbow room to choose somebody who could deliver it better than I can,” Say said.

He said Bello would not have compelled employers to regularize 300,000 workers for this year if the labor department were promanagement.

“Even if contracting is legal, he (Bello) was asking us to work on the regularization of workers. And 300,000 is not a small number. As of February, around 140,000 had already been regularized,” he said.

Say said he first told Bello in January that he wanted to resign but the latter merely shrugged it off and told him not to mind the intrigues.

He said he submitted his resignation letter to Bello and President Duterte last month but it was received by Malacañang only on Tuesday. —Tina G. Santos

Read Next
Duterte orders increase in NFA buying price for palay
EDITORS' PICK
Look Through: The fate of impounded stray dogs
House energy committee chair Arroyo bats for cheap electricity
What to watch out for when selecting a video surveillance solution
23,000 cops to be deployed nationwide for school reopening
Unleash the photographer in you this World Photography Day with vivo smartphones
DOH says COVID-19 cases plateauing, but public shouldn’t be ‘complacent’
MOST READ
Sharon Cuneta asks for prayers for friend in ICU who suffered silent stroke
Light therapy could be the answer to your sleep problems
Korina Sanchez reunites with former ABS-CBN co-anchors Julius Babao, Cheryl Cosim
PBA: San Miguel ousts Meralco to arrange finals duel vs TNT
Don't miss out on the latest news and information.