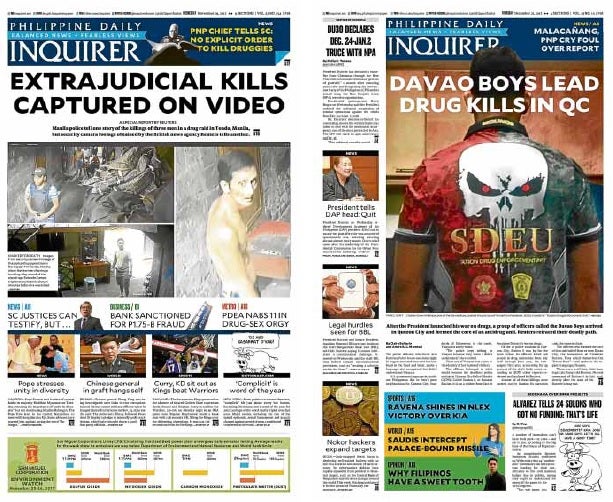 According to the Pulitzer Prize website, they were chosen for their “relentless reporting that exposed the brutal killing campaign behind Philippine President Rodrigo Duterte’s war on drugs.”

The Philippine Daily Inquirer was the only Philippine newspaper that gave prominence to the Reuters stories on the antinarcotics campaign.

The winners for the 102th edition of prize were announced on Monday at Columbia University in New York by administrator Dana Canedy.

The photography staff of Reuters also won in the feature photography category for its coverage of the Rohingya crisis in Myanmar and Bangladesh.

According to Reuters, it was the first time it has won two prizes in one year.

It was Marshall’s second Pulitzer Prize for international reporting.

In 2014, Marshall, Southeast Asia special correspondent, won the prize with his colleague, Jason Szep, and his team, for exposing the violent persecution of the Rohingya.

Baldwin, a special correspondent for Reuters, has been investigating the Philippine drug war since it began in June 2016.

For his part, Mogato told the Inquirer that he never thought he would bag a Pulitzer.

“That’s the Holy Grail for us,” said the 55-year-old Mogato.

Mogato, a journalist for more than three decades, has been Reuters’ political and general news correspondent in Manila for almost 15 years.

Mogato is the second Filipino to win a Pulitzer.

In 1942, Carlos P. Romulo won the Pulitzer Prize in correspondence for his works that predicted the outbreak of World War II.

His series of articles for the Philippines Herald on the Southeast Asian political situation provided prewar evaluations of the military situation in the Pacific area.

Malacañang congratulated Mogato even as it continued to justify the legitimacy of the antidrug campaign.

“But the fact remains,” Roque said, “that the policy of the President on the drug war is that the drug war is legitimate, intended to protect the youth from the ill effects of drugs.”

In other categories, The New York Times and The New Yorker won the Pulitzer Prize for public service for explosive reporting that brought down Harvey Weinstein and spawned a cultural watershed on the issue of sexual harassment.

The prestigious prize was awarded to the Times team led by Jodi Kantor and Megan Twohey and New Yorker contributor Ronan Farrow, for reports that disgraced the Hollywood mogul and sparked an avalanche of accusations against other powerful men.

Since the Times and New Yorker articles last October, more than 100 women have publicly accused the producer of misconduct ranging from sexual harassment to rape, sparking the #MeToo movement that has seen a string of influential men lose their jobs and reputation.

Weinstein’s marriage has ended, he has been under police investigation in London, Los Angeles and New York, hit by a litany of civil lawsuits and his former production company has been forced to file for bankruptcy.

Farrow, 30, is the son of actress Mia Farrow and film director Woody Allen, and something of a prodigy who has previously fronted his own television show, worked in Afghanistan and Pakistan for late US diplomat Richard Holbrooke, and formerly advised then Hillary Clinton on global youth issues when she was secretary of state.

The former Rhodes scholar, who graduated from Yale Law School at just 21, has sided with his sister Dylan’s claims that Allen molested her when she was seven. Allen has repeatedly denied the allegations.

“So so so proud,” tweeted Mia Farrow minutes after her son’s award was announced. Ronan Farrow paid tribute to his co-winners and The New Yorker.

“This moment gets called a reckoning, but we just started telling the truth about old abuses of power. Thanks to all who keep doing so,” he wrote on Twitter to his nearly half a million followers.

‘Most trying of times’

The Washington Post won the Pulitzer in the investigative category for relentless reporting seen as having influenced the outcome of the 2017 Senate race in Alabama, revealing Republican candidate Roy Moore’s alleged past sexual harassment of teenage girls.

The New York Times and The Washington Post shared the national reporting prize for furthering understanding of Russian interference in the 2016 election, and the connections between Russian actors and the Trump campaign, his transition team and administration, Canedy said.

“Winners uphold the highest purpose of a free and independent press even in the most trying of times,” she announced.

“These courageous, inspiring and committed journalists and their news organizations are undaunted in their mission in support of the fourth estate. It is a mandate that has been under a seemingly relentless assault of late but that remains central to a healthy democracy,” she added.

The prize for breaking news photography went to Ryan Kelly of The Daily Progress for a chilling image that captured the moment of impact by a car at a racially-charged protest in Charlottesville, Virginia that left one woman dead last August.

The Pulitzer for fiction went to Andrew Sean Greer for “Less” about growing older and love. The history prize was awarded to “The Gulf: The Making of An American Sea,” and the prize in drama for “Cost of Living” by playwright Martyna Majok. – Reports from Christine O. Avendaño, Leila B. Salaverria and AFP