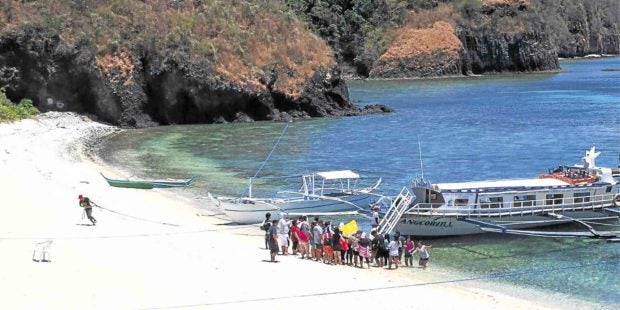 EMERGING DESTINATION The white sand beach of Sepoc Point in Tingloy, Batangas, has been attracting tourists due to travel blogs and social media posts. —CLIFFORD NUÑEZ

TINGLOY, Batangas — This town, the only island municipality in Batangas province, is drawing thousands of tourists because of its long white beaches and the cheap transportation and accommodation costs.

But local officials admitted they were not prepared for the sudden influx of visitors, as they scramble to make the island, at the very least, tourist-friendly.

“We were expecting tourists to come, especially with the closure of Boracay [Island in Aklan province], but we didn’t expect that much,” said Mayor Mark Laurence Alvarez.

“We were actually surprised. [Tourism] was not part of the [local government] plan, otherwise we would have prepared for it. It’s just that all of a sudden, it’s here,” said Herbert Dumaoal, municipal tourism chief.

About 45 minutes by boat (fare is P85) off the mainland in Mabini town, Tingloy is a second class (annual average income: P45 million or more but less than P55 million) fishing town with a population of 19,000.

Inland travel is commonly by tricycle, with power supply available only from noon to midnight. There are no hotels on the island but about 400 “homestays,” or transient houses offering an overnight stay for P300 to P700. Tourists often camp out on beaches or travel back to Mabini where more hotels and resorts operate.

Dumaoal said the local government was not aggressively promoting Tingloy but people somehow discovered the town through blogs and social media posts about the island experience.

“It’s really big. There were about 16,000 [tourists] in just four days during the Lenten week,” said the 23-year-old Alvarez, who is serving his first term as mayor of Tingloy.

Tourists left about a ton of garbage, prompting the local government to mobilize homeowners, boatmen and even tricycle drivers to help clean up the beach.

“More tourists mean more garbage. Look at Boracay,” Dumaoal said, referring to the popular tourist spot in Aklan that the government recently closed down due to the island’s degradation.

Alvarez said the Department of Environment and Natural Resources had allowed them to use an old dump while the town looked for funds to build a sanitary landfill.

Transportation in and out of Tingloy is also limited to only 28 boats (each with a capacity of 80 passengers) traveling from Mabini.

During the Holy Week, thousands were stranded at the ports of Anilao and Talaga in Mabini waiting to catch a ride to the island.

“To be honest, we’re considering regulating [the number of] tourists,” Dumaoal said.