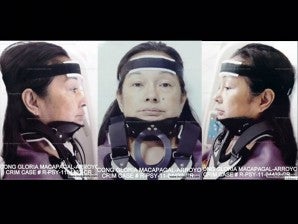 They may well be the most wanted, most sought after mug shots of a world leader from the Philippines, or at least, a former world leader.

Soon after the Philippine Daily Inquirer editors obtained copies of the photos Monday, the same pictures, apparently from other sources, also appeared on the Internet on the website “mugshots.com.”

The pictures carried the captions “Cong. Gloria Macapagal-Arroyo.” Underneath her name were the numbers of the criminal case against her.

It was the second time in recent history that  mug shots of an arrested Philippine leader had been taken and been circulated publicly. In 2001, a photograph of Joseph Estrada also appeared in the media, taken after he was detained on plunder charges.

The publication of Estrada’s picture occurred, ironically, during the Arroyo presidency.

Lawyers of Arroyo have asked the court not to release the  mug shots of their client, according to the clerk of court, Joel Pelicano.

“Any party wanting to see the photos must file an appropriate court pleading,” Pelicano told reporters.

Formal requests from parties who wish to see the pictures will be passed on to the defense lawyers for their comment before Judge Jesus Mupas acts on the requests, Pelicano said.

The Arroyo photographs were among the documents and other materials, including the so-called return of the arrest warrant, which were submitted by the Philippine National Police to Mupas’ sala.

Coronel told reporters the release of Arroyo’s photographs to the public “will be up to the sound discretion and good judgment of the court.”

He said the former President was now under the “care, custody and detention” of the Metro Manila police office and the Southern Police District (SPD).

Coronel wasn’t sure whether the Presidential Security Group still provided security for Arroyo, among the perks given a former head of state. But as far as the police were concerned, they were keeping watch over her, he said.

Court employees kept a close watch on the folder containing the documents about Arroyo. A document custodian obliged requests from office workers to take a peek at the photos of the former President.

“Kawawa naman (I pity her),” the Inquirer heard one of the employees say after seeing the pictures.

Employees turned down requests from the media to take a look at Arroyo’s mug shots.

In a phone interview later, Pelicano reiterated that Mupas had a standing directive against the release of Arroyo’s mug shots in the face of her lawyers’ requests to keep them within the court.

“There’s no specific court order but Judge [Mupas] directed us not to release the mug shots,” he said. “One of the defense lawyers manifested before the court that any release of the photos will affect the constitutional rights and interests of their client.”

Any media entity seeking to publish the mug shots now in the hands of the court must put its request in writing and file it with the court, Pelicano said.

Bayan Muna Representative Neri Colmenares defended the publication of Arroyo’s mug shots. In a text message, he said: “There is no reason not to publish Gloria’s mug shots, considering that this is a public document.”  With a report from Gil Cabacungan Jr.

Read Next
Poll exec on swift action: Priority, not rush to judgment
EDITORS' PICK
CHR hopes inequalities exposed by COVID-19 pandemic are addressed
Smart offers wireless fiber-like speeds to Filipino homes with country’s first 5G Prepaid Home WiFi
This new condo in the South will make you want to turn a new leaf
Legarda: Ending Violence Against Women, a cause for all
DOH: Booster doses for fully vaxxed adults to start December 3
BOQ monitoring 64 travelers from ‘red-list’ countries amid Omicron
MOST READ
DOH: Booster doses for fully vaxxed adults to start December 3
Another disqualification petition filed against Bongbong Marcos
Ex-DOT chief Ace Durano convicted of graft over 2009 project
Roque defends Bongbong Marcos: ‘He was only 15 years old in 1972’
Don't miss out on the latest news and information.