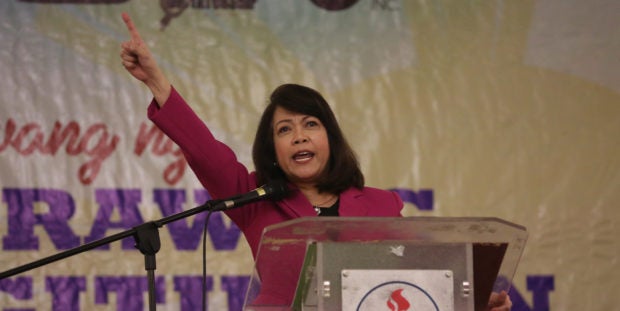 ‘NEVER GIVE UP, NEVER SURRENDER’ Chief Justice Maria Lourdes Sereno strikes a defiant pose while speaking at an Araw ng Kagitingan event in Quezon City, where she challenged President Duterte to prove he has no part in the bid to impeach her. —NIÑO JESUS ORBETA

“I was just asking [the President] a question that actually needed to be answered, [which is] why Solicitor General Jose Calida was devoting resources of the government to unseat [me],” Sereno said at a fellowship meeting of the Philippine Bar Association in Makati City.

“You heard his answer. His answer betrays the entire story,” Sereno said.

She warned the lawyers that if the quo warranto petition brought by Calida to invalidate her appointment succeeds, then “your fight against one-man rule is already lost even before you have begun.”

Sereno’s remark came on the heels of President Rodrigo Duterte’s directive to the House of Representatives on Monday to expedite the impeachment of the Chief Justice, which critics described as a violation of the constitutional principle of separation of powers.

The Chief Justice painted a bleak and dire picture of the future of the law profession should the Supreme Court grant the petition, which she said would bring “the destruction of the entire judiciary, as well as the constitutional framework.”

“The dangers besetting us strike at the very root of our nation,” Sereno said. “If they succeed [in removing] an impeachable officer nearly six years after her appointment, then every sitting justice will no longer be independent.”

The Solicitor General will have the newfound ability to bring quo warranto petitions against any of them, she said.