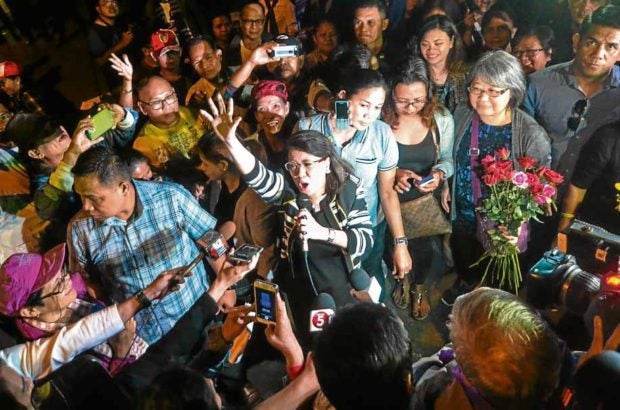 BAGUIO VIGIL Chief Justice Maria Lourdes Sereno thanks supporters who held a vigil outside the Supreme Court building in Baguio City after the six-hourlong oral arguments on the quo warranto petition filed by the Solicitor General to oust Sereno on Tuesday. —KARLSON LAPNITEN

A quo warranto petition may turn into a sword of Damocles hanging over the heads of Supreme Court justices if they allow it to be used to depose any of them, Associate Justice Alfredo Benjamin Caguioa said on Tuesday.

Caguioa raised this concern during the tension-filled oral arguments on the petition brought by Solicitor General Jose Calida to invalidate the appointment of Chief Justice Maria Lourdes Sereno held at the Supreme Court session hall in Baguio City.

In his interpellation of Sereno’s lead counsel, Alexander Poblador, Caguioa said ousting a justice through a quo warranto petition brought by the Office of the Solicitor General (OSG) would only weaken the independence and credibility of the Supreme Court.

“[The OSG] can latch on to any imputation of any crime involving moral turpitude and on that basis initiate the filing of a quo warranto petition against any justice and have him removed,” he said.

“If I follow the theory of (Calida), then whoever is the Solicitor General would [in the future] … have the ability to wield a sword over all our collective heads, over all our individual heads, and on that basis, therefore impair the integrity of the court,” he said.

In reply, Poblador said granting the quo warranto petition would provide an opportunity for the OSG to control the Supreme Court’s decision-making process since the OSG may arbitrarily file it against justices who had been voting against the state.

“[The OSG] can change the makeup of the court, influence how the court adopts policies and actually control [the tribunal] by selectively removing certain justices who do not align themselves with the government’s policy,” he said.

“Any sitting judge can be subjected to … harassment suits from disgruntled litigants, powerful politicians or a government that does not tolerate opposition,” he added.

According to Poblador, the 1987 Constitution grants the Supreme Court the authority to remove lower court judges, but not any of its members.

The power to remove Supreme Court justices is vested in the House of Representatives and the Senate through the impeachment process, he said.

Associate Justice Marvic Leonen, the only magistrate who had voted to immediately throw out Calida’s petition for lack of jurisdiction, shared Caguioa’s view, noting that the ruling the justices would hand down would guide the future decisions of the Supreme Court.

“In the future, it might be easy to oust a sitting justice based on the doctrines if we allow your case,” he added.

No clearance from Duterte

Quizzed by Leonen, Solicitor General Calida maintained that he did not seek permission from President Rodrigo Duterte to dislodge Sereno.

On Monday, the President declared himself Sereno’s “enemy” and said he would “egg on” Calida.

The President also directed Congress to expedite the impeachment of the Chief Justice.

As pointed out by Sereno, Leonen said the question of the Chief Justice’s integrity based on her supposed failure to submit statements of assets, liabilities and net worth (SALN) had already been passed upon by the Judicial and Bar Council (JBC).

If at all, he said, Calida’s petition was tantamount to an appeal of an executive action done by the JBC and then President Benigno Aquino III five years ago.

Caguioa also expressed doubt about Calida’s claim that the OSG, being the state’s primary law office, was not covered by the one-year limit to filing a quo warranto petition spelled out in Section 11, Rule 66, of the Rules of Court.

“If we were to follow (Calida’s) theory, he would have unfettered discretion to file quo warranto suits at any time for anything so long as he’s able to relate it to the question of integrity,” he said.

Associate Justice Samuel Martires took offense at Sereno’s claim that she was “compelled” by her colleagues, 13 of whom had forced her to take an indefinite leave, to attend the six-hourlong oral arguments.

Martires, however, opted not to engage the Chief Justice in a verbal tussle, directing his questions to Poblador.

He also asked why Sereno had been passing the blame for her alleged failure to submit SALNs to other people, a logical fallacy called tu quoque (you, too), which is also known as appeal to hypocrisy.