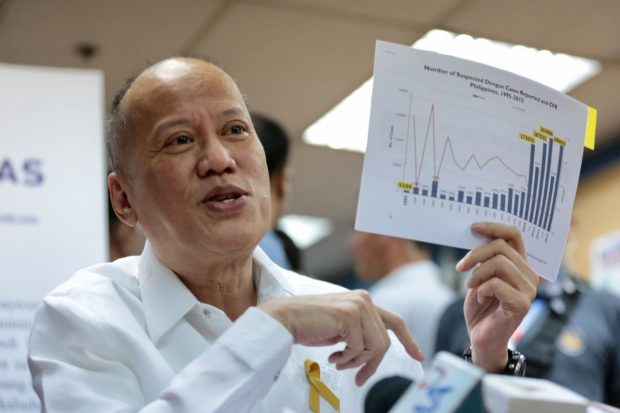 ormer president Benigno Aquino III shows a graph of dengue cases at a news briefing at the Comelec office after filing a counter affidavit on the Dengvaxia complaint filed by VACC.-Inquirer/Grig C. Montegrande

Former President Benigno Aquino III is ready to face charges in connection with the controversial dengue vaccine he had approved for a P3.5-billion mass immunization program that some of his critics have blamed for the death of several children, according to his spokesperson.

Abigail Valte made the statement on Wednesday in response to Sen. Richard Gordon’s recommendation to file criminal charges against Aquino and his budget secretary, Florencio Abad, and health secretary, Janette Garin, and other former Department of Health (DOH) officials for the Dengvaxia mess.

“Former President Aquino has always demonstrated his readiness to answer questions about his decisions as President,” Valte said. “His consistent participation in legislative investigations and other venues shows this.”

“He will continue to face whatever additional complaints are filed in connection with this matter,” she added.

Gordon, chair of the Senate blue ribbon committee, recommended charges of graft and violation of the government ethics code against Aquino, Garin, Abad and seven other former health officials for allegedly conspiring to approve the use of Dengvaxia.

Vaccine-maker Sanofi Pasteur is also criminally liable for selling “a defective product, endangering, hurting and maybe even killing children” who were inoculated, according to Gordon’s 20-page draft report.

“The confederacy to procure and inject en masse was not merely ill-advised, or unwise. It was criminal,” said the report, which has yet to be approved by other members of Gordon’s committee.

“The greatest sin and transgression of Aquino was to put the lives of Filipino children in grave peril. He simply did not care. He was insensitive and did not have compassion,” the report said.

The controversy over Dengvaxia erupted after Sanofi disclosed in November last year that the vaccine could worsen symptoms in vaccinated people who have had no previous exposure to the mosquito-borne disease.

The government spent P3.5 billion for the immunization program that inoculated about 830,000 children aged 9 to 14 years.

The DOH halted the program following Sanofi’s disclosure. The French company reimbursed P1.4 billion for the unused vaccines, but it refused to refund the rest of the money demanded by the government.

Aquino appeared in the Senate investigation of the Dengvaxia controversy and a separate inquiry by the House of Representatives.

He repeatedly explained that he approved the purchase of the vaccine in response to the dengue outbreaks that had resulted in numerous deaths. He rejected insinuations of corruption in the purchase of Dengvaxia.

In a text message to the Inquirer, Abad said: “I haven’t seen the committee report, but as far as I’m concerned there’s absolutely no basis for the recommendation to file graft charges.”

Garin said Gordon’s report was “one-sided and full of inaccuracies and half-truths.”

“The report is one-sided because he has prejudged the case from the very beginning based on the inputs of vested interest parties who want to control the DOH,” Garin said in a statement.

She asserted that it was her predecessor, Enrique Ona, who had declared a dengue epidemic.

The antidengue program was important because her successor, Paulyn Ubial, “continued and even expanded it,” Garin said.

“My conscience is clear and I am ready to answer any charge that will be filed in the proper forum,” she said.

Read Next
Chief Justice Sereno warns: One-man rule is here
EDITORS' PICK
Nestlé Philippines’ ‘NESCAFÉ Plan’ bags Grand Anvil at PRSP 56th Anvil Awards
822 NPA-free barangays set to get P20-M gov’t aid — Esperon
Pope Francis to meet top cleric Sistani on second day in Iraq
Don’t waste the hope of vaccines, warns WHO
Every Filipino home can now be a smart home with realme TechLife
Smart reinforces superiority with best speed and mobile video experience in PH
MOST READ
So: I lacked connections to succeed in PH ‘culture’
Robredo on Sara Duterte leading poll surveys: Why are Filipinos drawn to leadership of this kind?
Gerald admits being with Julia, reveals breakup with Bea through ‘too many conversations’
US lays out list of aid to ‘satisfy’ Duterte following VFA payment demand
Don't miss out on the latest news and information.