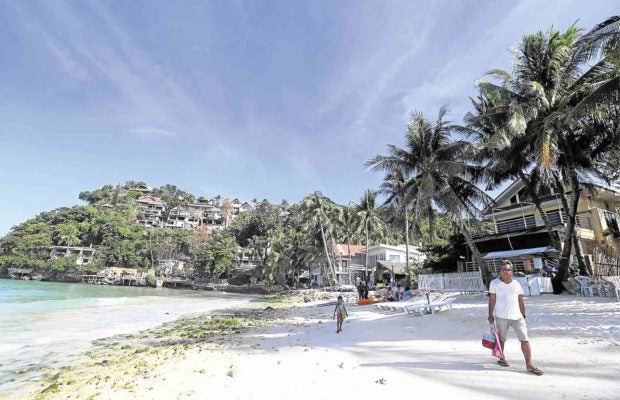 Large sections of forest areas and wetlands in Boracay have given way to commercial establishments as tourists continue to flock to the resort island in Aklan province. —LYN RILLON

As the closure of Boracay Island in Aklan province draws near, the Department of Environment and Natural Resources (DENR) has proposed the establishment of “critical habitats” in the area to protect plants and animals thriving in the country’s top tourist destination.

An assessment conducted from February to March showed that the proposed critical habitat in the villages of Balabag and Yapak is home to the endemic and endangered golden-crowned flying fox and nesting grounds for the critically endangered hawksbill turtle and endangered green turtle, according to the DENR Biodiversity Management Bureau (BMB) in a consultation with businesses occupying the northernmost coasts of Boracay on Wednesday.

The area is also home to several threatened plant species such as molave and “bantigue” trees, and the “pitogong dagat,” and nascent corals.

The first proposed forest and marine critical habitat is expected to be established during the impending six-month closure of the island. Sections of this area are occupied by 11 private owners, mostly resorts.

“We will not allow further degradation of these ecosystems and species … Boracay is dependent on its biodiversity for water, soil stabilization, food, and as a tourist attraction.”

President Rodrigo Duterte approved on April 4 the closure of Boracay Island for six months, starting April 26, to give way to its rehabilitation.

Theresa Mundita Lim, DENR-BMB director, assured business owners in Boracay that private facilities would not be demolished, “if they are not in the way of the protection of the habitat.”

According to Lim, disturbance of critical habitats is a criminal offense penalized under the Wildlife Protection Act. “[But] if businesses are found to be occupying [the area] illegally, that’s another matter,” she said.

Cimatu said he would sign an administrative order to establish the first Boracay critical habitat next week, in time for a meeting that would be attended by representatives of government agencies, businesses and residents in Boracay on April 17.

Other critical habitats may be established on the island, pending further biodiversity assessments.

Lim also cited a Mines and Geosciences Bureau study, which found 142 cave networks on the island which might collapse, if businesses occupying these critical habitats push through with development plans.

“That’s why we need to be more careful … These developments might affect the cave network,” Lim said in a press briefing. “If you destroy the cave, actually you can make the species that survived there extinct.”

The DENR also said that three of the 12 wetlands earlier identified on Boracay Island had disappeared.

Lim said wetlands are important because these areas absorb water, preventing floods in Boracay. “Flood usually occurs when these wetlands are covered,” she added.

“Historically, we were able to identify 12 wetlands in the area, but in 2008, we could no longer locate three of the wetlands,” Lim said. —With a report from Faye Orellana