2 dead, 6 hurt as crane crashes down in Pasay 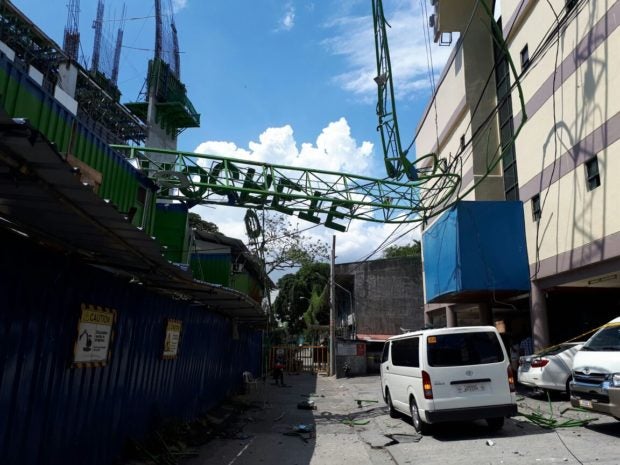 Part of the metal crane that fell on a commercial building, Core Town, in a construction site along Celle St. in Pasay City. INQUIRER photo / Lyn Rillon

Two men were killed and six others were injured after a metal crane in a construction site crashed onto a commercial building in Pasay on Tuesday afternoon.

In a report submitted to Chief Supt. Tomas Apolinario, director of the Southern Police District, the accident happened when a crane tower was being set up in the ongoing construction of STI building near the corner of P. Calle and Edsa around 12:30 p.m.

The report said the crane tower fell down and its boom hit the adjacent Core Town building, killing an unidentified man on the spot and damaged several vehicles parked in the area.

The crane operator identified as Jonathan Diserdo, 32, of Monocrete Construction, was rushed to San Juan de Dios Hospital but was declared dead.

The injured victims, who were also being treated at the same hospital, were identified as security guards Kumbo Mabunay, 24, and Jay Ballon, 29, both from Modern Security Agency detailed at the construction site; and crane erectors Francisco Angcatan, 59; Melvin Yosores, 28, and Elmer Sedol, 46.

Also hurt was Liu Shen Xiu, a 30-year-old Chinese national who was at the comfort room at the fourth floor of Core Town building when the accident happened.

The report said the crane tower was being jacked up to add mast when the pressure of the hyrdraulic cylinder went low, causing the crane to collapse.

As of this posting, the Pasay police have cordoned off the area surrounding the damaged building. Investigation is still ongoing. /jpv