Tagle to Filipinos: Be living witnesses of Jesus where ever you go | Inquirer News
Close
menu
search

Tagle to Filipinos: Be living witnesses of Jesus where ever you go 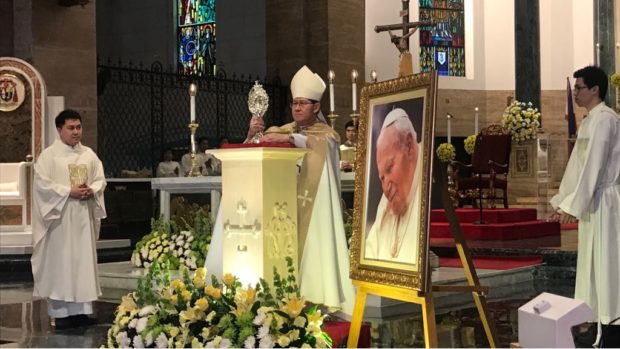 Like Saint Pope John Paul II, Manila Archbishop Luis Antonio Cardinal Tagle urged all Filipinos to be witnesses of Jesus Christ and spread his love to the ends of the earth.

Tagle made the remark during the welcome mass on Saturday, April 7, in honor of the blood relic of the late Pontiff.

The relic, a glass container carrying the actual blood of Saint Pope John Paul II, was entrusted to Filipinos by his former secretary, Polish Cardinal Stanislaus Dziwisz. It would be available for public veneration until 8:00 p.m. on Sunday, April 8.

In his homily, Tagle said that the news of Jesus’ resurrection that triumphed over sin was spread by witnesses, “not by experts, not by scientists, not by so-called knowledgeable people.”

“They were simple people: Mary Magdalene, the two disciples walking, Peter, Andrew, John. The news was entrusted to them,” Tagle said.

“What made them witnesses, paano sila naging saksi [How they become witnesses]? They met the Lord. The risen Lord gifted them with the gift, a precious gift: He appeared to them, not that they deserved it, not because they earned it. It was a surprise. It was a gift,” he said.

Manila archbishop Luis Antonio Cardinal Tagle to Filipinos: Be witnesses of Jesus Christ, go to the ends of the earth to spread the news that He is rise, that He is alive. Tell stories of how He touched your lives. @Team_Inquirer pic.twitter.com/LMLyLoXyJJ

Even when others refused to believe them, Tagle said they were firm in their resolve to spread the news with one simple message: “The Lord has appeared. I have seen the Lord. He is truly risen. I met him, I saw him, and I will share it with you.”

The Manila archbishop then told the faithful: “Open our eyes. He wants to come to us, and we’ve seen him. Tell the good news to those who are suffering, those who are in despair, go assure them that the Lord is risen. The Lord is real. I have seen him.”

Tagle then recounted how Saint John Paul II traveled all over the world and told people not to be afraid of Jesus and the life He offers.

“Twice he brought that message to the Philippines, (in 1981) when he beatified then Blessed Lorenzo Ruiz, and again in 1995 (when he attended) the unforgettable World Youth Day where many young people met the Lord in priesthood, in religious life, in lay mission,” Tagle said.

The country, Tagle said, was always welcome in the heart of the late Pontiff.

Compare: The position of St. John Paul II's blood relic and where then Pope John Paul II stood during his Feb. 17, 1981 Mass at the Manila Cathedral. It's just a few steps away from where the beloved Pope stood, 37 years ago. @Team_Inquirer pic.twitter.com/ZQVgGlvIjn

“Now, we welcome him again. The relic of his blood, life. The life of mission continues, but it is life in Christ, life in the risen Lord, so that new life would truly happen,” Tagle said.

“With Saint John Paul II, let us be witnesses of Jesus to the ends of the earth,” the archbishop said./jpv