Palace: Duterte remains happy with Aguirre except for ‘certain debacles’ 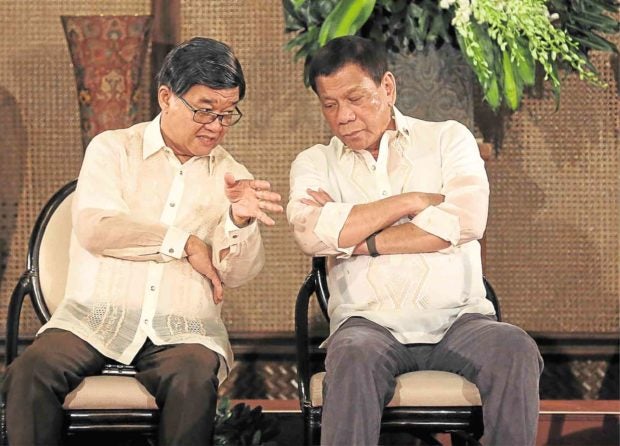 President Rodrigo Duterte remains satisfied with the performance of Justice Secretary Vitaliano Aguirre II except for “certain debacles” in the justice department, Malacañang said on Wednesday.

“[President Duterte] has been generally satisfied with the performance of the secretary of Justice, well, except for certain debacles that happen to the DOJ recently,” Senior Deputy Executive Secretary Menardo Guevarra said in a Palace briefing.

“The President did not hide his displeasure about certain developments pertaining to the war on drugs more specifically the dismissal of charges against certain high-profile suspects,” Guevarra said.

Reports have circulated that President Duterte would fire Aguirre following his displeasure with the dismissal of drug charges against top drug suspects.

But Guevarra said the chief executive has not made any announcement regarding the issue and Malacañang has not received any resignation letter from any Cabinet official.

Duterte had earlier hinted of a possible Cabinet revamp, citing he was not happy with the performance of some of his officials.

“We are not aware of any impending Cabinet revamp,” Guevarra said.

Amid resignation rumors, Guevarra said Aguirre and Bello would still be attending the Cabinet meeting in Malacañang on Wednesday afternoon.

“Yes, of course they have been invited to attend the Cabinet meeting this afternoon,” he said. /jpv