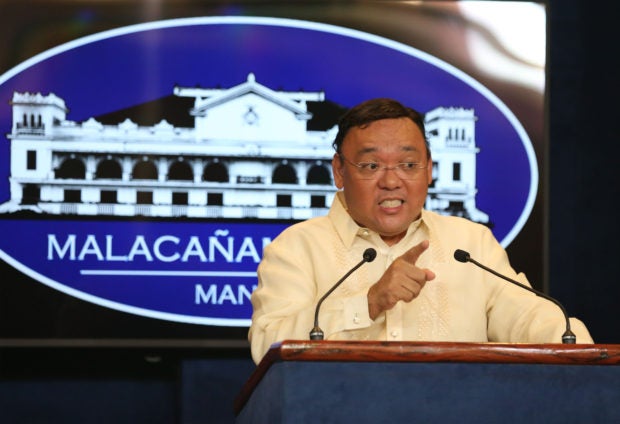 Presidential Spokesperson Harry Roque said that Duterte’s statement that he would put Aguirre to jail if suspected drug lords Peter Lim and Kerwin Espinosa go scot-free is a “very clear expression of concern.”

“Whether or not it should be taken literally by Secretary Aguirre, I will repeat what I have often said: Even you don’t take the President literally; you take him all the time seriously,” Roque said in a press briefing.

Duterte on Tuesday vented his ire against Aguirre after the reported dismissal of drug charges against Lim, Espinosa, and several others tagged in illegal drug trade in the country.

“I will invoke my power of supervision and control and will review dismissal,” Roque posted on Facebook, quoting Duterte.

“’Pag-nakawala yan si Lim at Espinosa, sya [Aguirre] ang ipapalit ko (If Lim and Espinosa escape, I will put him [Aguirre] in jail.) I can review that dismissal order. Nag-amin na nga sa (He already admitted to) Congress! Why not admit it as evidence against him?” he wrote in a separate post, also quoting Duterte.

Roque said that Aguirre would continue to enjoy the President’s trust and confidence as long as he has not been fired.

“Siguro po the trust remains dahil kung hindi naman, sisisantihin po siya ng Presidente (The trust probably remains because if not, he would be fired by the President),” Roque said.

“And the President has not hesitated to fire even members of the Cabinet. For as long as he has not been fired, he enjoys the trust and confidence of the President… as, you know, as is the case with all of us,” he added. /jpv