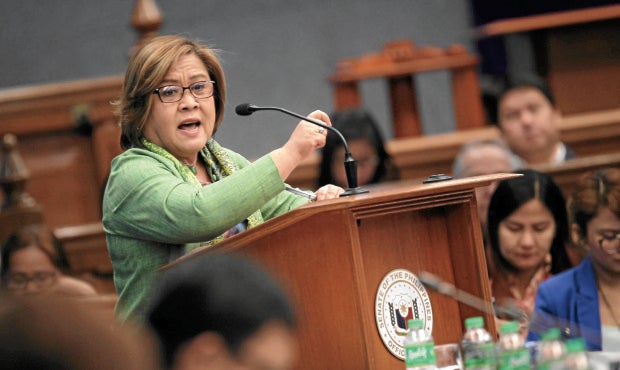 De Lima said that the version of the draft federal Charter submitted to Congress by President Rodrigo Duterte’s political party, Partido Demokratiko Pilipino-Lakas ng Bayan (PDP-Laban), “makes it clear” that the only nationally elected government official is the President.

The Prime Minister, which heads the day-to-day operations of the federal government, is elected by parliament upon nomination by the President.

“We can also see how a similar set-up works in China, when it is only the Communist Party that makes all decisions, even about the recent constitutional amendment that has now allowed President Xi Jinping to stay in power indefinitely, far beyond the two-consecutive term limit that was in effect up until now,” De Lima said in a statement.

“Does that scenario seem increasingly familiar in the Philippine context, too? You be the judge.” she added.

De Lima said the PDP-Laban’s version would “not likely be representative of the general will of the people” especially with the “shadow of a foreign power looming and peering over the shoulders of many powerful and influential people” like politicians and businessmen.

The detained senator insisted that President Duterte and his allies’ plan to change the 1987 Constitution “appeared to be self-serving” and a pretense from the reality that the proponents “want something else.”

“Like someone who, after being confronted by the demands of real, hard work – or what we call public service – suddenly gives up and blames the Constitution for their failures,” De Lima said.

“At worst, all those are just pretext. The proponents really want something else, and they’re trying hard to make sure we can’t see through their pretense,” she added.

De Lima likewise said it is difficult to trust an administration that has already shown its “susceptibility for abusing power, for allowing impunity to reign, and for lying repeatedly to the public.”

“If we can’t trust them to tell the truth, how can we trust them when they say that they are only looking out for the interests of the Filipino people?” she said.

Various efforts to change the Constitution have been ongoing.

President Duterte’s Consultative Committee to review the 1986 Constitution (Con-com) has started reviewing and drafting the new federal Charter. It is set to submit the proposed Constitution in July, before the president holds his third State of the Nation Address (SONA).

Congressional committees on Cha-cha, meanwhile, have already started conducting hearings and formed the while lawmakers have agreed to form a constituent assembly (Con-ass) as a means to amend the Constitution.

De Lima said that in reality, what people think do not matter because “all that matters is what the strong leader wants.”

“What he wants, he gets. To hell with the people – they can’t be trusted to know what’s good for them anyway,” she said. /je