Tagle to wash feet of priest from Marawi 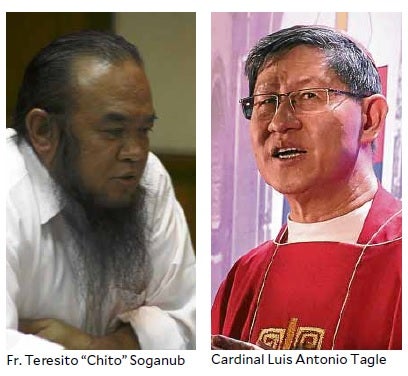 Fr. Teresito “Chito” Soganub will be one of 12 people whose feet Cardinal Luis Antonio Tagle will wash on Maundy Thursday.

Soganub, who was held hostage for 116 days during the terrorist siege of Marawi City last year, will join migrants, refugees and other displaced people during Mass at Manila Cathedral in Intramuros.

According to a statement issued by the cathedral, Manila Archbishop Tagle will celebrate the Evening Mass of the Lord’s Supper, which includes the ritual of the washing of the feet, a commemoration of Jesus’ show of humility to change the hearts of his disciples on the night before his death.

The statement quoted Pope Francis’ New Year message in January, in which he urged Catholics to “embrace all those fleeing from war and hunger, or forced by discrimination, persecution, poverty and environmental degradation.”

“Our dear archbishop echoes this appeal in his Easter message: ‘By rising from the dead, Christ invites us to roll away the stones that are blocking our own hearts and imagination to share the journey with each other—in particular with the most vulnerable people, such as migrants,’” it said.

The Mass will be held at 5 p.m. on Maundy Thursday.

The ritual of the washing of the feet is known as the “Mandatum.” It commemorates the Last Supper of Jesus, during which he washed the feet of his 12 disciples to cleanse their hearts of selfish ambition, kill their pride, and teach them the lesson of love.

The rite comes after the homily and Gospel reading, with the priest pouring water on the feet of selected people and drying them with a towel.

The statement said Soganub, a priest with the Prelature of Marawi, was chosen because “he still believes in promoting understanding and peace among peoples” despite being held hostage by Maute and Abu Sayyaf terrorists during the five-month siege of Marawi.

The 11 others whose feet Tagle will wash are Crisanto and Eva Demafelis, parents of Joanna Demafelis, the Filipino maid who was killed in Kuwait; Irfan Masih and Shazia Irfan, Catholics who fled their homeland due to religious persecution; Danilo and Janet Pelayo and their daughter Danica, a poor family who relocated from Paco, Manila, to Cabuyao, Laguna province; Isidro Indao and Kaylo Bontolan, “lumad” leaders who fled their reservation because of militarization and environmental destruction; Giovanni and Yolicres Badidles, a couple serving in the Philippine Navy but apart, with the husband serving in northern Luzon and the wife patrolling the seas off West Palawan.

Only hundreds of the faithful are expected to attend the Mass, unlike before when thousands filled churches during Holy Week.

Catholic bishops lament the shift in the people’s regard for religious observances.

“Today, Holy Week becomes a respite from work and not so much a season for sacred observances,” Fr. Jerome Secillano, executive secretary of the permanent committee on public affairs of the Catholic Bishops’ Conference of the Philippines, said on Tuesday. —Julie M. Aurelio