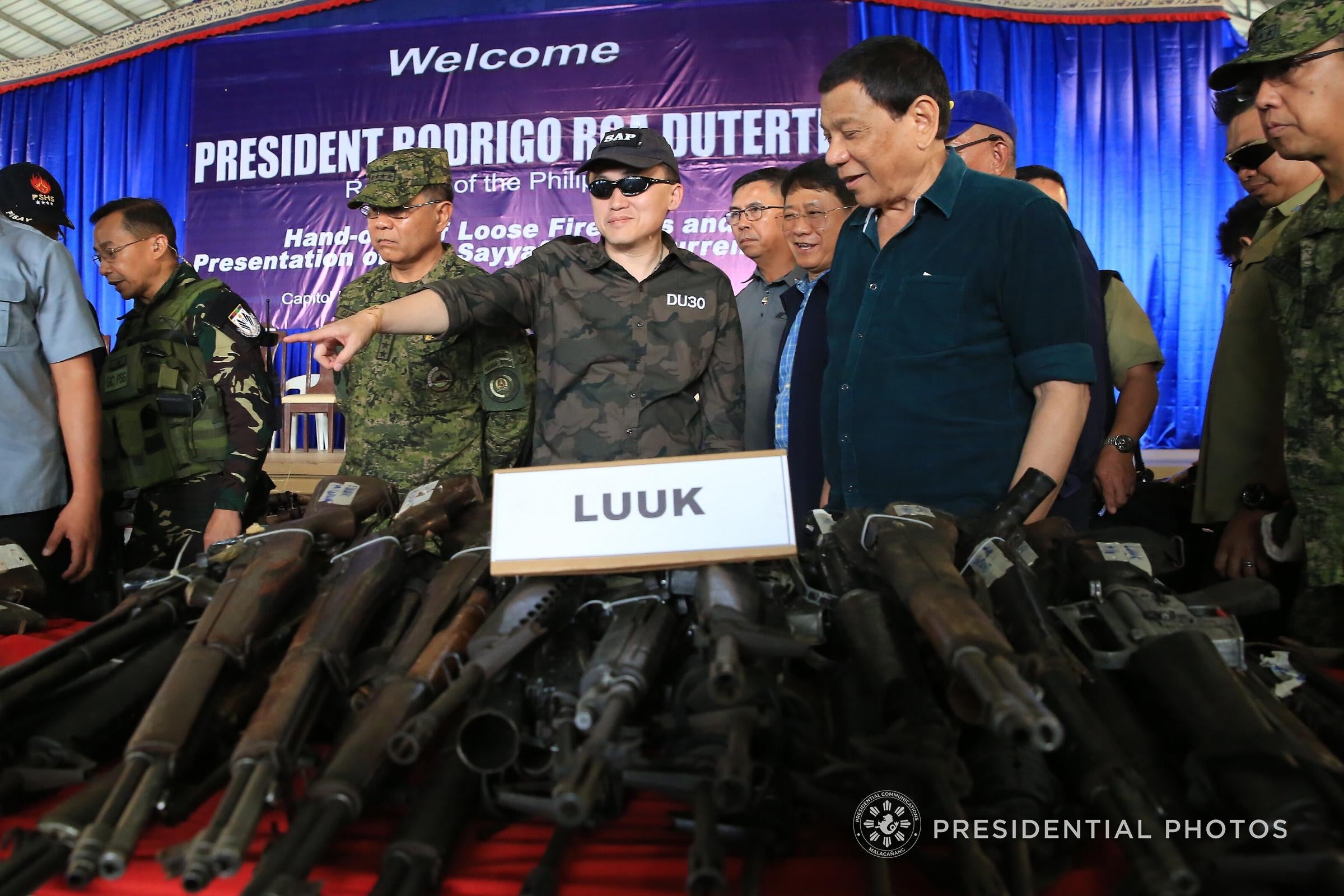 SURRENDERED GUNS President Duterte inspects the firearms handed over by Abu Sayyaf bandits who have turned themselves in during Monday’s program at the Capitol in Patikul, Sulu. MALACAÑANGPHOTO

PATIKUL, Sulu — While taking a hard line on communist rebels, whom he wants legally declared terrorists and wiped out, President Duterte is welcoming with a soft heart internationally recognized and condemned terrorists who have surrendered to the authorities.

During a visit here on Monday, the President received 76 Abu Sayyaf bandits who surrendered separately to the military last year.

He offered them housing and other assistance to smoothen their reintegration into society.

“I came here because I am reading, hearing it, seeing it on TV, of the number that some of our brothers who have surrendered. This time en masse,” the President said.

The Abu Sayyaf started out as a jihadi group in the 1990s, but turned to banditry after its leaders were killed in clashes with the police and the military.

The terrorist group has become notorious for kidnappings for ransom, mostly of Westerners whom the bandits decapitate after they fail to receive money from the captives’ governments or relatives.

Same as help to NPA

The United States and the European Union have declared the Abu Sayyaf terrorists.

The President, however, said he wanted to take care of Abu Sayyaf bandits who had surrendered, just like he was taking care of New People’s Army (NPA) guerrillas who had given up to return to normal life.

He said he did not exactly know what the Sulu surrenderers wanted to do with their lives but in the meantime, he was offering them houses and livelihood, similar to the assistance that communist rebels in Mindanao who had surrendered were getting.

“For those interested, [the] government is ready. Houses. Sulu is big. I can build small houses here. I can accommodate you,” the President said.

He said he wanted a peaceful resolution of the Abu Sayyaf problem in particular and the Moro problem in general because seeing young people die pained him.

“I said in a conference that the life span of Joloanos, not here but those [fighting in the] hinterlands, averages about 40,” he said.

“It’s pitiful. I am also a Mindanaoan. I am also hurt. The guy doesn’t know [what he is fighting for]. He was not even schooled. Call him ignorant if you will, and they only know how to fish with limited resources and everything, and they are swayed by fervor, I don’t know,” the chief executive said.

He said that contrary to what jihadis had been claiming, the government’s campaign against lawlessness in Sulu was not about religion.

“There is no war of religion in this country. It is not an issue and has never been,” the President said.

He said he wanted peace in Sulu, as the people of the province had suffered long enough.

“The people had no respite from violence. There are a lot of opportunities. This is such a beautiful [place],” he said.

“So if somebody [in the Abu Sayyaf] is listening, stop it. Do not kill [people] because [they have] no money. Stop it. I am not angry [with] you,” he added.

Mr. Duterte also said he wanted to consult the Tausug about the proposed Bangsamoro Basic Law (BBL) pending in Congress.

The proposed BBL would establish a new, larger autonomous region for Muslims in Mindanao, conceived as part of a peace agreement signed by the government and the Moro Islamic Liberation Front — the biggest Muslim insurgent group in Mindanao — in 2014.

In an apparent response to an earlier Abu Sayyaf threat to kill him, the Presidewnt said: “I’ve been telling the communists, you want me killed? What can you do if I am killed? I’m more useful to you … alive.”