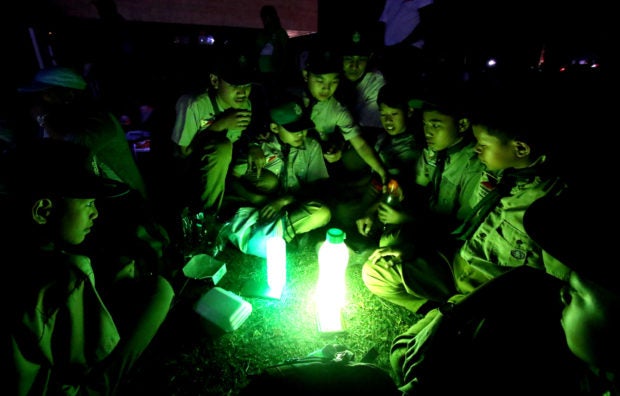 ILLUMINATING WATER BOTTLES Boys Scouts use their cell phones to illuminate bottles of water during an Earth Hour program at the Cultural Center of the Philippines in Pasay City. RICHARD A. REYES

Madonna Salas, a teacher in Ilagan, Isabela province, observed a one-hour shut-off of lights at home on Saturday night “to help a bit in reducing [her] power usage and to contribute in easing the effects of climate change.”

In Tacloban City, Carmen Bueno has been observing Earth Hour for three years as her “own way of helping our environment.”

Salas and Bueno were among the millions who took part in Earth Hour, a campaign to raise awareness about the impact of climate change by switching off lights for 60 minutes starting at 8:30 p.m. local time.

The Sydney Opera House in Australia, Eiffel Tower in France, and Red Square in Russia were among the world landmarks to go dark on Saturday.

The annual global lights-out event started in Sydney in 2007 and has spread to more than 180 countries.

Electric consumption in the Visayas on Saturday night dropped by 49.38 MW, said Jorey Maleza, an energy department supervisor. It was a huge improvement from the 44 MW recorded in 2017 and the 29.8 MW in 2016.

Some participants rode bicycles from the Ormoc City Stage to the main streets. Others lit candles in the shape of the Earth Hour symbol.

In Iloilo City, a countdown was held at a mall as part of a program joined by hundreds of participants. Power was also turned off at City Hall and the Capitol.

In Pasay City, some 500 Boy Scouts gathered at the Cultural Center of the Philippines (CCP) for the switch-off event led by the World Wide Fund for Nature. They ended the program by reading their pledge for the environment.

Some 300 bikers joined the event after riding more than 15 kilometers earlier from Malabon and other cities to promote low-carbon mobility.

At Ali Mall in Quezon City, Melinda Ocan Castro of Baguio Gawang Kamay-Products showed shoppers how plastic strips and used clothes could be turned into pot warmers and bottle carriers, how twigs and used paper could be made into living room decor, and how used bathroom tissue cardboard cores could become penholders.

“It was dark at the camp last night,” said Supt. Aries Faltado of the Regional Police Strategic Management Unit in the City of Calapan, Mindoro Oriental province.

In Davao City, the local government and various establishments led the switch-off. A sports goods shop organized night rides participated in by dozens of cyclists.

A parade was held at SM malls in Davao. Gaisano and other malls also joined the switch-off.

In Davao del Sur, Digos City Hall was unlit for nearly an hour.

Streetlights and other “unnecessary lights” were turned off at Zamboanga City Hall, where an Earth 101 presentation was earlier conducted.

In Isabela, power was shut off for an hour in the cities of Cauayan, Ilagan and Santiago and 34 towns.