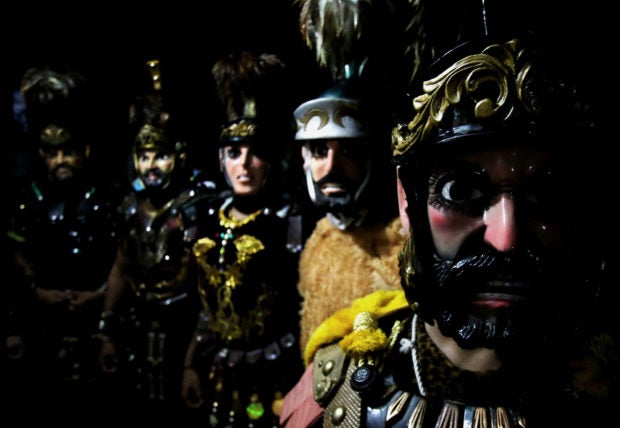 Morions rehearse for Senakulo or Passion of the Christ reenactment in Marinduque.
INQUIRER PHOTO / RICHARD A. REYES

Marinduque’s Moriones is a Holy Week tradition centered on the reenactment of the passion of Jesus.

Its history dates back to 1807 when Fr. Dionisio Santiago, parish priest of Mogpog in Marinduque province, mounted a play based on the story of the Roman soldier who spears the side of the crucified Jesus in the Gospel of John.

The play follows medieval tradition, which has named the soldier Longinus. As Longinus spears the side of Jesus, blood spurts from the wound and a drop falls on his blind right eye, which heals miraculously.

Longinus instantly proclaims his faith in Jesus, for which he is chased around town, captured and beheaded.

The Moriones event has become a tradition in Mogpog and the towns of Boac and Gasan, which are converted into stages for retelling the story of Longinus.

Moriones comes from the Spanish word “morion,” which means “helmet,” the open type used by Spanish soldiers during the period of conquest, which in no way resembled any of the 1st-century Roman helmets.

Locals put on elaborately carved masks and colorful costumes to portray Roman soldiers and parade on the streets for days, searching for Longinus.

Moriones culminates in the beheading of Longinus on Easter Sunday.