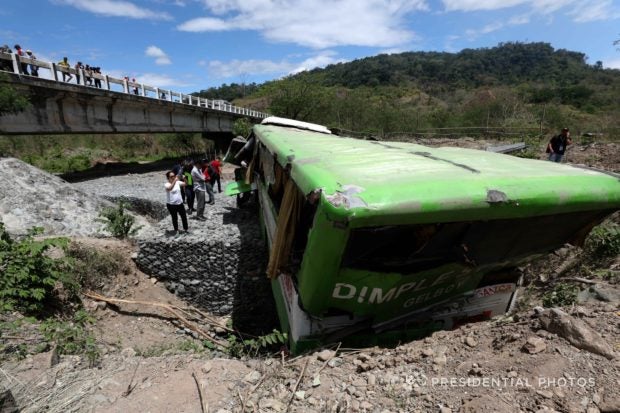 The owner of the Dimple Star bus that figured in a fatal crash that claimed the lives of 19 people in Occidental Mindoro surfaced on Friday night at the Philippine National Police (PNP) headquarters in Camp Crame.

Hilbert Napat, owner of Dimple Star Transport, came forward to the PNP Criminal Investigation and Detection Group to help the unit sift through details of the incident, which happened on Tuesday night.

The Dimple Star bus fell into a 15-meter-deep ravine in Barangay Batong Buhay, Sablayan town killing 19 people, including the driver, and injuring 21 others.

According to PNP-CIDG chief Director Roel Obusan, the Dimple Star owner’s appearance before the unit was voluntary and would help jumpstart the investigation into the fatal road accident.

Obusan told reporters: “His coming here is to show that he is volunteering and cooperating with our investigation.”

He pointed out that the PNP-CIDG is yet to determine if there is justification to keep Napat in police custody.

“As of now, we do not have a case against him,” Obusan said.

Napat went to the CIDG after President Rodrigo Duterte ordered his arrest. /jpv