CPP to AFP: Stop ‘deceiving and forcing people’ to pose as NPA 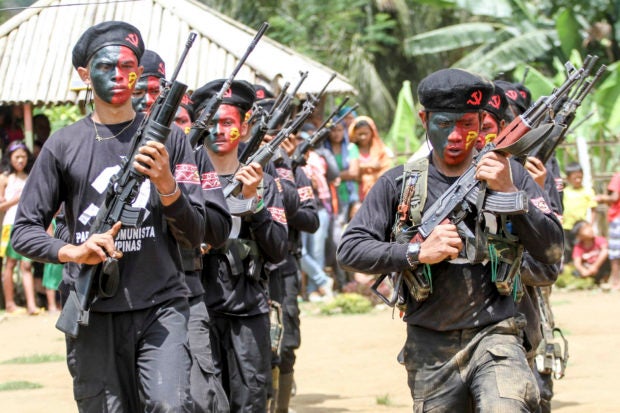 This photo taken on April 19, 2017 shows New People’s Army (NPA) guerillas, the armed wing of the Maoist Communist Party of the Philippines (CPP), marching in the hinterlands of Matanao town, Davao del Sur province on the southern island of Mindanao. (AFP FILE PHOTO)

The Communist Party of the Philippines (CPP) doubted the number of rebel returnees being claimed by the Armed Forces of the Philippines (AFP), and slammed the military for “deceiving and forcing people” to allegedly model as surrenderees of the New People’s Army (NPA).

“Deceiving and forcing people to pose as NPA [surrenderers]. To come up with big numbers, the AFP employs deception, threats and violence to force people pose as surrenderees,” the CPP said in a statement issued on Thursday.

The CPP made the remark in response to the military’s claim that more than 4,000 armed members and supporters of the NPA have surrendered to authorities since January.

“They must end this practice of Red-tagging and making people pose as NPA members in violation of their rights. Such practice endangers the lives of people by deliberately blurring the lines between armed combatants and civilians,” it also said.

Figures released by the AFP on Thursday showed that 4,356 regular members and supporters of the NPA surrendered from January 1 to March 15 this year.

The AFP said majority of surrenders happened in eastern Mindanao, particularly in the regions of Davao and CARAGA, with a total of 96% or 4,194.

“The AFP expects more surrenders as former rebels and supporters divulge corruption and deception inside the CPP-NPA. Revelations from former rebels disclosed that most of them were deceived into believing the propaganda and false promises of their leaders,” the AFP said in a statement.

The AFP estimates that there are still 3,700 armed-fighters of the NPA. In an interview with CNN Philippines early this week, Defense Secretary Delfin Lorenzana said that while there are less than 4,000 armed members of the NPA, their number of supporters are “so huge.”

NPA members and supporters who turned themselves in to the government last year had been divided into groups to join President Rodrigo Duterte for dinner, and tour around Manila in recent months.

“Over the past few months, Duterte himself and the entire military and defense establishment have spent hundreds of millions of pesos to stage Malacañang dinners with the President, tours around Luneta and other cheap gimmickry,” the CPP said.

The communist group also accused the AFP that some of the funds for the surrenderers went to the pockets of military officers on the field.

“According to our sources, funds from Duterte’s discretionary and intelligence funds are automatically downloaded to the ATM accounts of brigade and battalion commanders depending on the number of ‘NPA [surrenderers]’ they report. Thus, military field units are in a frenzy of conducting psywar operations to hold ‘surrender activities’,” the CPP said.