Aguirre: Drug case vs alleged drug lords not ‘back to zero’

Department of Justice (DOJ) Secretary Vitaliano Aguirre II said on Tuesday that he has issued an order “vacating the dismissal” of the drug case against Kerwin Espinosa, Peter Lim, and several others.

“The effect of dismissing the Kerwin case has been vacated and the case is remanded to the new Panel of Prosecutors for further proceedings. During this time, parties are allowed to submit additional evidence in support of their respective positions,” Aguirre said.

The DOJ chief said the motion for reconsideration filed by the Philippine National Police (PNP) is now considered moot and academic.

He clarified that his order to ‘vacate’ the Dec. 20, 2017 resolution favoring Lim, Espinosa and several others does not scrap the resolution. Aguirre said his order is in pursuant to his authority to conduct automatic review.

“The order was issued in the exercise of my power under automatic review,” Aguirre said.

He said the new panel will also allow the submission of new evidence.

“The case is now wide open for the submission of evidence by both parties,” Aguirre said./kga 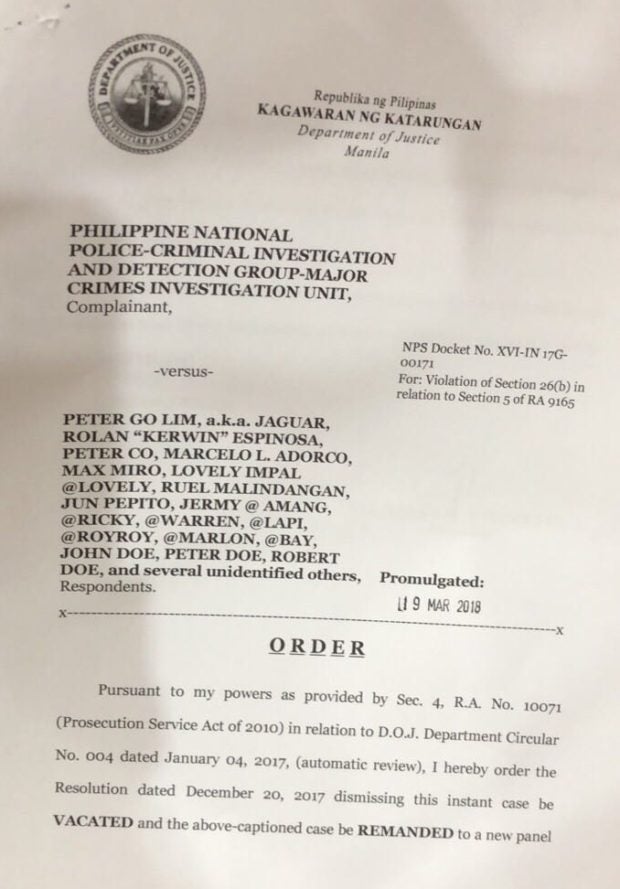