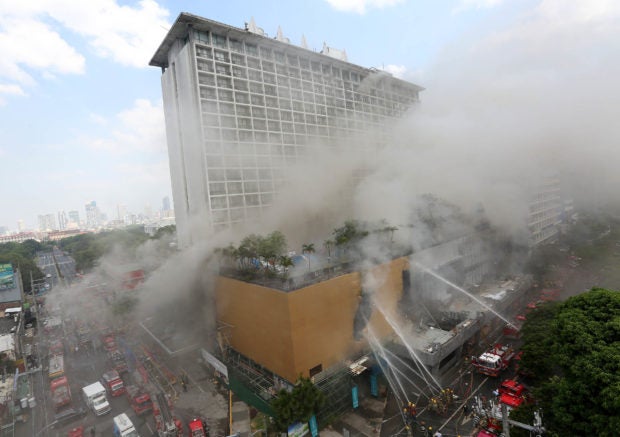 Thick smoke billows from the 50 year old Manila Pavilion Hotel and Casino after it caught fire around 9:30 a.m. on Sunday. Firefighters are still investigating the cause of the fire, which reached Task force Bravo.
INQUIRER / MARIANNE BERMUDEZ

The fire that hit the Manila Pavilion Hotel and Casino rekindled past 11 a.m. on Tuesday, an official said.

Johnny Yu, director of the Manila Disaster Risk and Reduction Management (MDRRMO), confirmed in a text message that around 11:30 a.m., the fire once again broke out at the said hotel.

On Sunday morning, the fire started to destroy the Manila Pavilion Hotel and Casino along UN Avenue in Ermita, Manila.

It was declared fire out at 10:56 a.m. of Monday or about 25 hours since the fire first broke out.

The fire incident killed five people who were all employees of the Philippine Amusement and Gaming Corporation. /jpv

3 people die, at least 18 others injured in Manila Pavilion fire