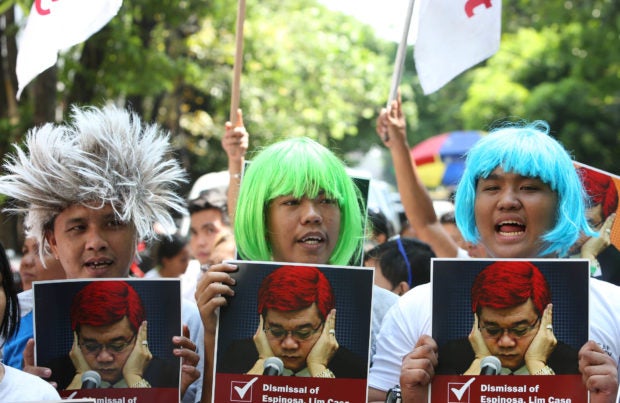 Sen. Risa Hontiveros on Monday called for the resignation of Justice Secretary Vitaliano Aguirre II, whom she called a “manufacturer and peddler of fake news,” “cook of fake cases” and “a reliable friend of criminal masterminds, extrajudicial killers and drug lords.”

“Mr. Aguirre has transformed the Department of Justice (DOJ) into his personal kitchen,” where he cooks false information and cases against the opposition and absolution for killers, big-time plunderers and drug peddlers, Hontiveros said in a statement.

Members of the party-list group Akbayan staged a rally in front of the DOJ building in Manila to demand Aguirre’s resignation.

“They are doing that just to put us in a bad light even if they knew that I was right,” he said.

“We respect the valid exercise of freedom of assembly and expression. However, I will remain [in the DOJ] for as long as I enjoy the trust and confidence of the President,” he said.

The PNP chief said he would take responsibility if indeed the Criminal Investigation and Detection Group submitted weak evidence, as the DOJ prosecutors claimed in their resolution dismissing the charges against Lim, Espinosa and Co.

Dela Rosa said the PNP was keeping an eye on a case it had filed against the people behind a big “shabu” (crystal meth) laboratory in Virac, Catanduanes province, because of reports that the DOJ would also dismiss it.

Justine Balane of Akbayan said Aguirre should relinquish his post instead of protecting big-time drug dealers and embezzlers of public funds.

“If Aguirre keeps on freeing criminals [on] his watch, [he] is free to leave the DOJ,” Balane said.

“This only shows that criminals are happiest under the Duterte administration. The war on drugs and the fight against corruption are all fake,” she added.

Balane also slammed Aguirre for bringing criminal cases against critics of President Duterte, the latest of which is an indictment for sedition against opposition Sen. Antonio Trillanes IV.

Hontiveros said she had been calling for Aguirre’s resignation since last year after the justice chief tried to discredit witnesses to the killing of a minor in Mr. Duterte’s war on drugs and plot to expedite cases against her.

“Mr. Aguirre’s continued stay as justice secretary demonstrates how the Duterte government’s war on drugs is one-sided and a complete fakery,” she said.

Sen. Nancy Binay told reporters it was up to Aguirre to decide whether to quit.

But noting that the DOJ had taken some controversial actions, Binay said: “He might need to reflect, especially now it’s almost Holy Week. Time to reflect.”

Detained Sen. Leila de Lima scoffed at Aguirre’s bid to link her to the leak of documents in the DOJ.

De Lima said Aguirre was insinuating that some people in the DOJ still close to her leaked the documents and she was behind their release to the media.

“Mr. Aguirre, you had me jailed and all, your incompetence is still my fault? It’s not my fault if you grew up to be stupid and incompetent. I have nothing to do with that,” De Lima said in a statement. —WITH A REPORT FROM NIKKO DIZON