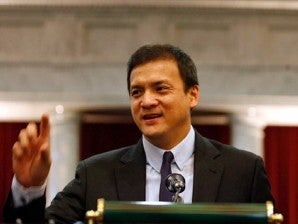 Lawmakers are asking the Supreme Court to discipline its spokesperson, Jose Midas Marquez, for allegedly misleading the public on the temporary restraining order (TRO) the tribunal issued last week against the travel restriction imposed by the Department of Justice on former President Gloria Macapagal-Arroyo.

Marquez defended himself from allegations that he intentionally fed the media with erroneous information that the TRO was executory and effective immediately.

“I’m standing by what I announced (during the press conference),” Marquez told the Philippine Daily Inquirer over the phone. “That’s what (the justices who voted with) the majority told me. That’s the position of the majority.”

House Majority Leader Neptali Gonzales II said the Supreme Court should investigate Marquez if the spokesperson went out of bounds and interpreted the TRO wrongly in the middle of the airport drama in the aborted departure of Arroyo to Singapore last Tuesday.

“As court administrator and spokesperson of the Supreme Court, only the tribunal can investigate him and impose disciplinary actions if warranted,”  Gonzales said.

Deputy Speaker Lorenzo Tañada III said the high court should determine whether Marquez had deliberately misled the public for claiming that the TRO was executory when the Arroyo couple had failed to comply with one of its three conditions.

In her dissenting opinion, Associate Justice Ma. Lourdes Sereno had argued that the

Nov. 15 TRO had remained ineffective because the Arroyo couple had failed to comply with Condition No. 2—that “the petitioners shall appoint a legal representative common to both of them who will receive subpoena, orders and other legal processes on their behalf during their absence.”

Sereno said “the TRO is conditional, and cannot be made use of until compliance has been done. (As) there was failure by petitioners to comply with Condition No. 2, the TRO is implicitly deemed suspended until there is compliance with such condition. A conditional TRO is what it is, conditional.”

Reacting to Sereno’s dissenting opinion, Marquez stood firm on his earlier statement that the high court deemed the TRO “in full force and effect,” thus, allowing Arroyo and her husband, Jose Miguel “Mike” Arroyo, to leave the country.

Sereno warned Marquez not to “go beyond his role,” noting that he had “no authority to interpret any of our judicial issuances, including the present resolution.”

She said it was “a function (Marquez) never had from the beginning.”

She claimed the majority ruled that the TRO was “suspended pending compliance” with its November15 resolution.

But Marquez said no less than Chief Justice Renato Corona, who voted to let Arroyo seek treatment abroad for her degenerative bone disease, explained to him what transpired during the closed-door deliberations.

“I also spoke with other justices in the majority and I got the same information,” he said.

In an e-mailed statement, Marquez said while Sereno was entitled to her own view, her “dissenting opinion is just that—a dissent.”