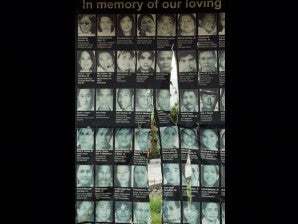 DAVAO CITY—The massacre that caught the world’s attention and gave the country the reputation as the world’s most dangerous place for journalists haunts Mindanao journalists two years later.

Asked to take pictures of the Davao mansions of the Ampatuan clan, a photojournalist who normally covers stories in conflict areas promptly asked, “Are there snipers there?”

A TV5 camera crew which had taken shots of the mansions during the day refused to film nighttime scenes in the area because of the reported presence of armed men in the buildings. “That is impunity,” said Jeffrey Tupas of TV5 Davao.

“It was an eye-opener,” said Art Bonjoc Jr., the area news manager of ABS-CBN news and current affairs in Northern Mindanao, when he talked about the massacre that killed 58 people, 33 of them journalists, in Ampatuan town in Maguindanao two years ago on November 23.

“It made me realize the Philippine press is not free at all; and if journalists are not free, then, Filipinos, in general, are not free. The more reason for media to be vigilant,” said Bonjoc, also chairman of Cagayan de Oro chapter of the National Union of Journalists of the Philippines (NUJP).

“If there was one glaring lesson journalists should learn from the massacre, it was that it wouldn’t have happened if we, as journalists, had only faithfully done our job of exposing the truth,” said Dodong Solis, former station manager of the RMN radio network, now head of the Internet-based One Radio.

“We are used to covering prominent politicians with whole battalion of bodyguards in full battle gear tagging behind them and yet we keep a blind eye,” said Solis, a member of NUJP-Davao advisory council.

“When we see their luxury cars and expensive lifestyle, we turn the other way, as if these things are normal,” Solis said. “Later, we realized they don’t respect human dignity, this was how we contributed to impunity.”

A survey in October showed that Filipino journalists were already self-censoring themselves for fear that what happened in Maguindanao would also happen to them.

This “culture of impunity,” wherein media practitioners can anytime be harassed or killed while performing their duties, has self-restricted journalists, said the survey.