Asean what? SWS finds 45% of Pinoys ‘not much’ aware of it | Inquirer News
Close
menu
search

Asean what? SWS finds 45% of Pinoys ‘not much’ aware of it 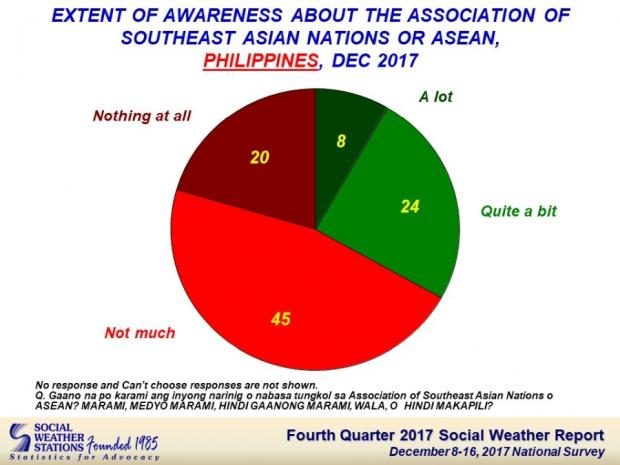 About 45 percent of Filipinos are “not much” aware of what the Association of Southeast Asian Nations (Asean) is, a nationwide Social Weather Stations (SWS) survey taken in the last quarter of 2017 revealed.

In a media release on Wednesday, the SWS disclosed that only 8 percent of Filipino adults were “aware” of what Asean is; 4 percent were “quite a bit” aware, and 45 percent were “not much” aware.

The remaining 20 percent said they were “not at all” aware of the Asean, the survey firm noted.

Despite this, the SWS found that 79 percent of Filipinos believe that the Philippines benefits from being an Asean member.

It has a margin of error of ±3 percent nationwide, ±4 percent for Luzon, and ±6 percent each for Metro Manila, Visayas and Mindanao, the SWS said.