PH Air Force gets 6 ScanEagle UAVs from US 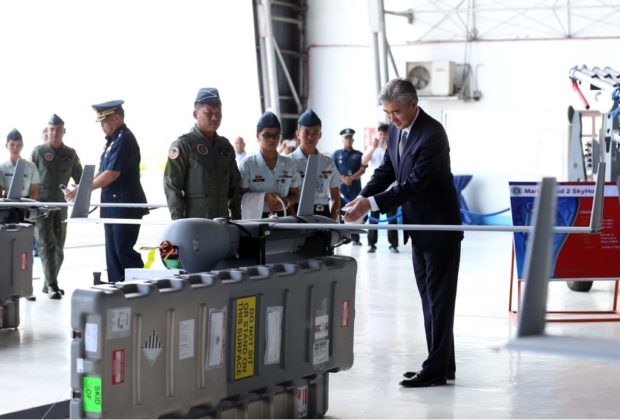 US Ambassador to the Philippines Sung Kim oversees the turnover of six ScanEagle Unmanned Aerial Vehicle (UAV) units to the Phlippine Air Force at the Villamor Air Base in Pasay City on Tuesday, March 13, 2018. (Philippine Daily Inquirer/Lyn Rillon)

The Philippine Air Force (PAF) has acquired from the United States six ScanEagle unmanned aerial vehicles (UAV), a first in the history of the Philippine military.

The six UAVs were obtained through a foreign military financing grant from the US in the amount of approximately $13.76 million.

PAF chief. Lt. Gen. Galileo Kintanar said the acquisition of this asset marks a milestone in the history of the Armed Forces of the Philippines (AFP).

US Ambassador to the Philippines Sung Kim and Defense Secretary Delfin Lorenzana led the formal acceptance, turnover, and blessing ceremony at the Villamor Air Base in
Pasay City on Tuesday.

The units would later be handed over to the 300th Air Intelligence and Security Wing, according to PAF Spokesperson Maj. Aristides Galang.

Officials said these drone systems would be used in intelligence, surveillance, and reconnaissance missions — a big boost to the internal security operations, counterterrorism, and territorial defense operations of the military.

“This acquisition of ScanEagle is one way to deter to those who want to wage war in the country,” Lorenzana said in his speech.

The latest acquisition is also a sign of “goodwill, deep friendship, and genuine commitment to peace” of the US and Philippines, Lorenzana added.