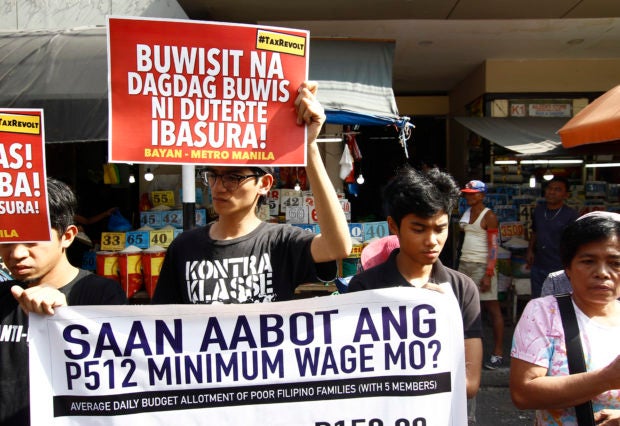 NO TO TAX PACKAGE Militants assail the Duterte administration’s tax reform package during a picket at a market in Sampaloc, Manila, in January, saying it will adversely affect minimum wage earners. —EARVIN PERLAS

The moderate Associated Labor Unions-Trade Union Congress of the Philippines (ALU-TUCP) has urged the government to save workers from falling “through the cracks” and deeper into poverty because of the new tax reform law.

ALU-TUCP spokesperson Alan Tanjusay said the daily pay of minimum wage earners and those in the informal sector had been devalued a couple of months into the implementation of Tax Reform Acceleration and Inclusion (TRAIN) Act.

The measure aims to fund President Rodrigo Duterte’s massive spending program for new roads, railways, ports and airports, and prescribes a rise in the excise tax on coal and tax increases on tobacco products, automobiles, petroleum products and sugary drinks.

Tanjusay said the purchasing power of the minimum wage was eroded by 6 percent in “a matter of two months from January to February” after the TRAIN law took effect.

The “extraordinary devaluation,” he noted, was significant among the informal sector workers earning less than P12,000 a month and minimum wage earners receiving less than the amount.

“We urge the government’s immediate and quality response to save and prevent these workers, who help build our economy and who are producers of goods and services to make our economy competitive, from falling through the cracks,” Tanjusay said in a statement.

Workers in the informal economy include independent, self-employed, small-scale producers, and distributors of goods and services, who are not covered by labor laws and have no social protection.

Tanjusay earlier warned that over 15.6 million workers in the informal sector would suffer from the implementation of the tax measure.

Results of a monitoring of prevailing prices by the Bangko Sentral ng Pilipinas and the National Wages and Productivity Commission released on Feb. 9 showed that the buying power of minimum wage earners has dropped across the country, Tanjusay said.

In the regions, the buying power of the average daily minimum wage of P329.35 went down to P210, he said.

As of March 1, the total purchasing power of workers for a month fell to P8,575, way below the P9,064 standard amount needed by a family of five to survive within poverty line in 2015, Tanjusay said, citing the Philippine Statistics Authority.

By signing the TRAIN law in December last year, Mr. Duterte had hoped that the government could compensate for the restructured personal income tax regime that raised the tax-exempt cap to an annual salary of P250,000.

Inflation in January rose to 4 percent, the highest since the 4.3 percent posted in October 2014, due to the tax measure, according to economic officials.

After hitting 3.9 percent by the end of February, the inflation rate was expected to rise further by the end of the month in view of the impending increases in the cost of electricity, rice, fish, sardines, vegetables, condiments and in gasoline prices, Tanjusay said.

He explained that the informal sector workers would be worse off under the TRAIN law because they would be made to pay more taxes without earning extra.

“Underground economy workers will be impacted by the rise in prices of commodities and in increase in the cost of services caused specifically by the TRAIN’s excise tax on fuel, sweetened beverages, and coal,” he said.

Unlike workers in the informal economy, he noted, employees with taxable income would benefit from the tax measure through its adjusted income tax exemptions.

Tanjusay said the government could help informal economy workers by improving its social safety-net protection for them.

ALU-TUCP has sought a meeting with the President on its proposed monthly subsidy of P500 for the minimum wage workers. The meeting has been moved from March 15 to March 22.

Under the proposed Labor Empowerment and Assistance Program (LEAP), minimum wage earners would receive P500 worth of grocery items to help them cope with the impact of the new law.