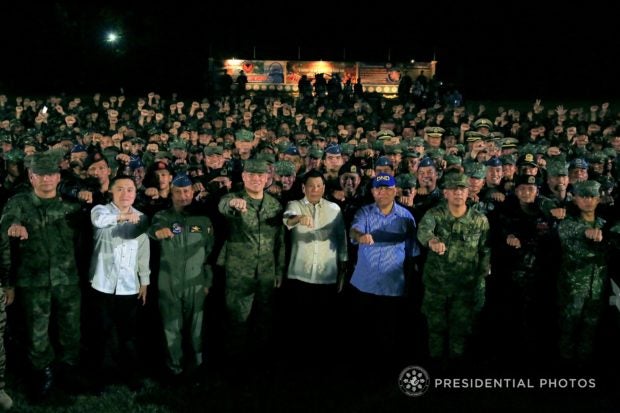 ZAMBOANGA VISIT President Duterte leads military officers and personnel in flashing his signature pose during his visit at Edwin Andrews Air Base in Zamboanga City on Saturday. MALACAÑANG PHOTO

ZAMBOANGA CITY — Lawyers from the International Criminal Court (ICC) who come to the Philippines to investigate the killings in the war on drugs will be fed to crocodiles, President Rodrigo Duterte said.

They don’t know their law and law enforcers should not talk to them, except to welcome them, he said.

“That is provided for in the Constitution — our Constitution,” Mr. Duterte said, referring to the right to remain silent, not to the feeding of ICC lawyers to crocodiles.

“Leave it to me. They are coming here. Do you have crocodiles here, the ones that really eat humans? Throw the sons of bitches there,” he said in a speech to troops at the headquarters of the military’s Western Mindanao Command here on Saturday.

Prosecutor Fatou Bensouda of the ICC last month opened a preliminary examination of a complaint for crimes against humanity filed against Mr. Duterte and at least 11 of his officials over alleged extrajudicial killings in his brutal war on drugs.

Malacañang belittled the ICC probe as a “waste of time and resources” but said Mr. Duterte welcomed it and would even argue his case before the tribunal if necessary.

But persistent calls for an independent investigation into the killings, most recently at a meeting of the United Nations Human Rights Council, turned the wind around and Mr. Duterte gave orders to the police and the military not to give information to anyone, including UN investigators.

“They say they are investigating us … you dumb … The rule in criminal law is, anything you say may incriminate you,” Mr. Duterte said.

“That’s why the best thing to do is just to keep silent. Tell them you have a Commander in Chief,” he said.

Mr. Duterte said he had worked for nine years as a trial lawyer. “I should know my law and I should know how to protect you,” he said.

But the ICC lawyers, “these guys do not know their law,” he said.

No order to kill

Mr. Duterte insisted that he did not violate any law by ordering the police and the military to destroy drug syndicates and their apparatus.

He said he never gave orders to kill, just to destroy the
organization.

But if there’s a fight and somebody dies, it’s because “they wanted it,” he added.

More than 4,000 mostly poor and small-time drug users and pushers have been killed by police since Mr. Duterte launched the crackdown in 2016.

Thousands more have been killed in attacks by unknown assailants.

When the ICC lawyers arrive, police and soldiers should just welcome them, he said.

“If they ask you for statements, [you say], ‘Sorry, the Constitution does not allow it and our Commander in Chief says that we shut up,” he said.

If everybody talks, he said, “there will be no uniformity in the answer and loopholes will be found.”

Contradicting statements will place “us in jeopardy,” he added.

“[S]hut up and say it’s Duterte’s order. He ordered [us] to destroy the organization,” he said.

“So what’s wrong with that? Can I not protect my country by killing people and destroying the apparatus?” he asked.

The military can even bomb a drug factory, he added. “We’ve got excess bombs.”

It’s talk like that that makes some people look askance at Mr. Duterte, and some really speak out their mind.

When the Department of Justice (DOJ) put down the name of the Filipino UN special rapporteur on the rights of indigenous peoples, Victoria Tauli-Corpuz, on a list of alleged terrorists last week, the UN human rights chief, Zeid Ra’ad al-Hussein, said Mr. Duterte needed to go in for “some sort of psychiatric examination.”

Administration officials balked, calling Zeid’s statement an insult, even though Mr. Duterte had been calling UN officials names for urging him to respect human rights in his war on drugs.

‘Work of the lazy’

Sen. Panfilo Lacson on Sunday said Zeid’s comment was uncalled for, but Sen. Antonio Trillanes IV said he agreed with the UN rights chief and urged Mr. Duterte to undergo psychiatric evaluation to prove he had a sound mind.

Lacson said Corpuz could always contest in court her being counted among 600 people whom the DOJ wanted the Manila Regional Trial Court to declare terrorists.

He said the DOJ list was “the work of the lazy,” noting that it contained names extracted from files that were gathering dust in the courts. —With a report from Christine O. Avendaño

Read Next
All hail to China’s Xi Jinping: Chairman of everything
EDITORS' PICK
Nestlé Philippines’ ‘NESCAFÉ Plan’ bags Grand Anvil at PRSP 56th Anvil Awards
Smart reinforces superiority with best speed and mobile video experience in PH
Every Filipino home can now be a smart home with realme TechLife
New 3,045 COVID-19 cases push PH total active cases to 40,074
LTO’s P500-M deal for screws draws scrutiny
How to lose a PH genius: Wesley So officially a US citizen
MOST READ
How to lose a Filipino genius: Wesley So officially a US citizen
US lays out list of aid to ‘satisfy’ Duterte following VFA payment demand
Robredo on Sara Duterte leading poll surveys: Why are Filipinos drawn to leadership of this kind?
Rights lawyer survives attack by playing dead, loses all case files
Don't miss out on the latest news and information.