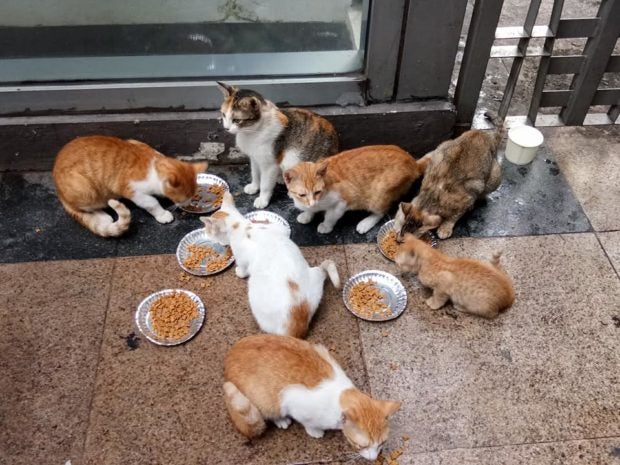 The cats are often fed and taken care of by those who live and work around Eastwood City. Image: Facebook/Cats of Eastwood City

Last month, the disappearance of the cats of Bonifacio Global City was met with the rage of netizens and the cat-loving community of Taguig who take care of the strays whenever they can. It turns out that the cats were relocated by the management of the adjacent hotel, Shangri-La at the Fort, Manila, according to an INQUIRER report on Feb. 19.

“Hi Everyone. Sorry to share the bad news. The missing cats were found dead near the fountain area. Reported by Ms. Phoebe. Not sure if they were poisoned or they were sick. It has been weeks since they went missing.” 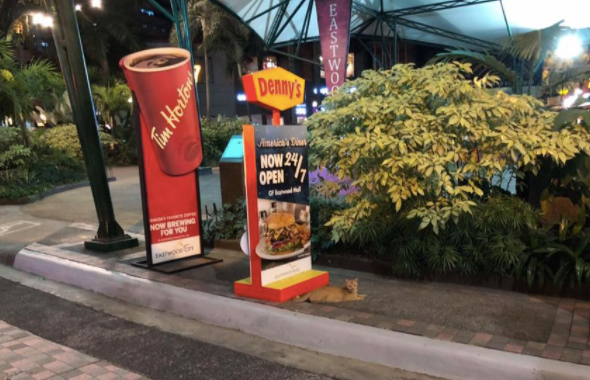 The cats often lounge around Eastwood, such as this orange tabby on Feb. 26.  Image: Facebook/Cats of Eastwood City

Netizens commented on the post, pointing out that the cats’ dead-stiff bodies and unnatural positioning show that they were possibly poisoned. Only one cat, the pregnant Silver, was identified in the comments by one of the supporters of the page.

The Cats of Eastwood City recently lost one of their cats, Famie, who showed symptoms of drooling and bleeding before it eventually died last Feb. 28, despite being brought to the Blessed Veterinary Clinic and Grooming Center II in Roosevelt Avenue, Quezon City. Adrian Y., one of the supporters of the Cats of Eastwood page pointed out in the comments section that other cats were seen drooling and bleeding recently, assuming that they might have been poisoned as well. 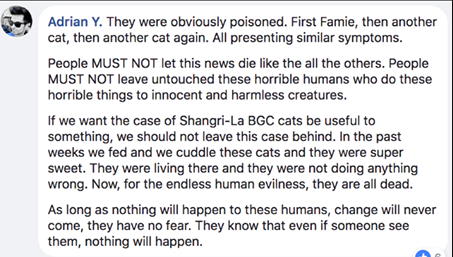 The Cats of Eastwood City page commented on the post two days ago, updating the people that they still do not know who the perpetrators are. As of late, they are still investigating and trying to gather information about the incident.

The page had called on for volunteers last Feb. 28, since the group is short on people. As of today, the page only has one administrator, Ana Santana.

“We need people who can feed, additional Admins [of the Facebook page], fund raisers and many others,” the page stated. “If you are interested you may get in touch with us. You may also look for me, Ana. Or send us a message here. I work in Eastwood too. Thank you for your support.” JB

It’s a cat-astrophe: Cats go missing in BGC, enraging netizens all over the country