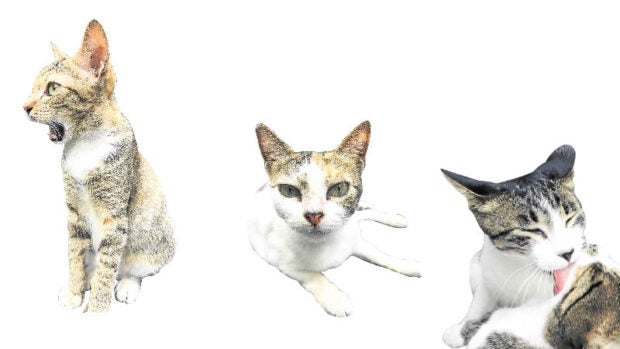 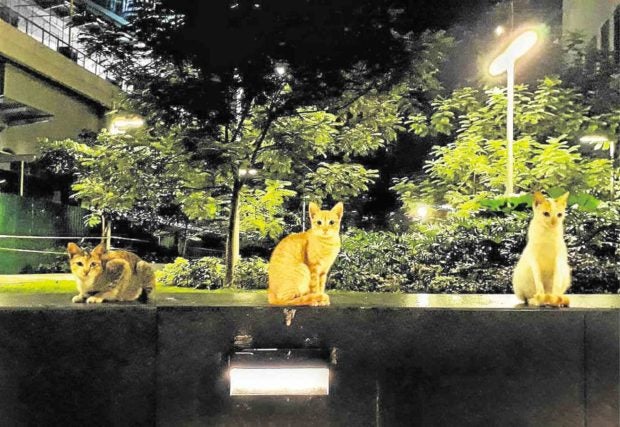 The cats enjoy a quiet December night at One Bonifacio High Street Park. (Top, from left) Meghan, Mama Cat and Eleven were some of the park cats cared for by the BGC community. —Photos taken from Marcelle Marcelino’s Facebook account and Cats of BGC Facebook page

Over the weekend, residents of Bonifacio Global City (BGC), as well as those who worked there were heartbroken, angry and demanding an answer to the question: Where are our cats?

The cat lovers’ posts on social media quickly became viral as they asked about the whereabouts of around 20 felines which had made One Bonifacio High Street Park in Taguig City their home over the past years.

The concerned community of volunteers later found out that the cat colony had been ordered removed from the park by the management of the adjacent hotel, Shangri-La at the Fort, Manila, which it later confirmed in a statement.

Although the group was only informed of the disappearances last week, Nancy Cu Unjieng, president of Compassion and Responsibility for Animals (Cara) Welfare Philippines, said to the Inquirer on Sunday that they had been told of it happening since November.

Unjieng said that Shangri-La general manager John Rice confirmed to Cara Welfare that they had hired Pestbusters, a pest control company, to go to the park “and to literally dispose of the cats” in the dead of night.

According to Unjieng, Cara Welfare will demand a public apology from Shangri-La for its “ignorance of the Animal Welfare Act” and Pestbusters for its “greed of money” and violation of Republic Act No. 8485 and its implementing rules and regulations.

“We want them to reveal exactly where the cats were taken because people who were feeding them will go and try to retrieve them. We will put them back where they came from,” she said.

“Shangri-La was told that Pestbusters had relocated the cats. But there is no such thing as relocating cats. Where do you relocate them unless you throw them, dump them somewhere?” she added. “You cannot abandon animals, you cannot just dump them anywhere.”

In a statement on Feb. 16, the hotel said that over half of the cats had been adopted by its employees and the others were “relocated” to two unspecified areas in Taguig.

“We would like to assure everyone that no harm has been done to the cats that have been relocated,” it added.

Unjieng said the pest control agency had no authority to deal with the colony as cats were considered “companion animals” and “never categorized as pests.”

Although the hotel promised to stop the disposal of the remaining cats, residents were skeptical, demanding proof that employees had actually made adoptions.

“Why ignore the public outrage for more than 24 hours? Why hide facts about [the cats’] current location?” BGC resident Woonie Park Somosot, 34, asked in an interview on Sunday.

“The community is the one taking care of these cats and we used our own resources, time, effort and not to mention patience,” Somosot said.

The cat colony had become a beloved, permanent fixture in the area and fostered a strong sense of community as volunteers worked together to nurture, neuter/spay, vaccinate and feed them. The group even has a Facebook page (Cats of BGC) showing pictures of the park cats who are up for adoption.

Marcelle Marcelino, a BGC resident whose Facebook post about the missing cats has been shared nearly 6,000 times, said they had never bitten nor harmed anyone.

“They’re very friendly. They’re actually the main attraction of that park, the reason people would come,” he told the Inquirer. Their removal, he said in his post, left the area devoid of “life, energy [and] love.”

“I walk up and down High Street a lot and love to pet and interact with the friendly cats,” Myra Puyat Santiago, 43, said.

“I don’t worry about safety,” she told the Inquirer. “That’s the difference between the BGC cats and what others think of as feral pests — by caring for these cats, you create an environment that keeps unsafe feral cats away. When you remove [them], you leave a vacuum for the unsafe cats to come in.”

Having lived on McKinley Road near BGC for four years, Santiago said she was angry that the hotel removed the cats which had their own names and were the unofficial pets of many Taguig residents.

Bernadette Leonardo, 30, told the Inquirer that the BGC cats were her “happy pill and stress reliever.” She was thus crestfallen when she visited the park on Feb. 15, armed with
several packs of cat food.

“I still go from High Street to Shangri-La to feed the remaining cats, [but] it saddens me that there are only four or five … The joy in that area is gone,” said Leonardo, who has been working in BGC since 2015.

It wasn’t just the immediate community that mourned the loss of the cats—Muhammad Haykal Lorena, 30, is a Quezon City resident who had formed a special bond with a cat in the park whom he named Gregory.

“He would lie on my lap and loved taking selfies with me … I am worried he might be lost, hungry, or worse, dead. My heart aches as I may not see him again,” Lorena told the Inquirer.

The Inquirer tried but failed to reach Shangri-La and Pestbusters for comment. In a post update, Cats of BGC said it met last week with the hotel management which promised to help find permanent homes for the cats.