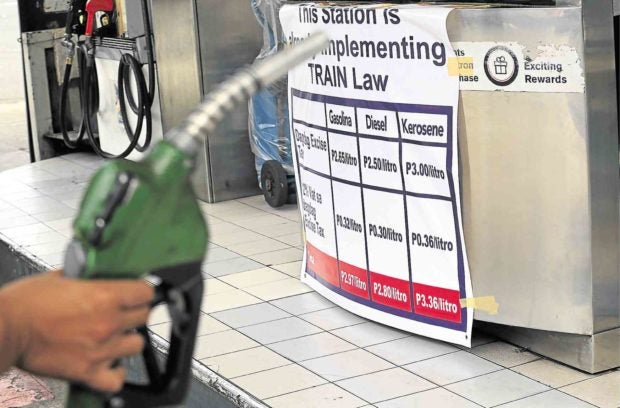 Gasoline stations, like this one in Manila, started to ride on the TRAIN law by announcing increases in pump prices as a result of the new tax law. —GRIG C. MONTEGRANDE

CAGAYAN DE ORO CITY — The highest-ranking official of the Bureau of Internal Revenue (BIR) in Northern Mindanao expressed apprehension about failing to meet the regional BIR office’s tax collection target this year because of the effects of a tax reform package that exempts thousands of income earners from paying taxes.

“We will do our best,” said Hermeno Palamine, regional BIR chief for Northern Mindanao. “We cannot yet tell if we can achieve it (tax collection target),” he said.

Palamine said the BIR regional office’s collection in January was on track as it was able to hit its monthly collection target. He did not give a figure, though.

But he said in 2017, the BIR here was able to collect more than P13 billion from the region’s taxpayers.

The figure, Palamine said, was mostly from income taxes.

Under the Tax Reform for Acceleration and Inclusion (TRAIN) Act, those earning P250,000 per year were exempted from paying income taxes.

This made the BIR regional office a little apprehensive about meeting its yearly collection target, said Palamine.

He said for 2018, the BIR Northern Mindanao’s target was to raise the amount of taxes collected in 2017 by 20 percent.

“The BIR is on a wait-and-see situation as far as its collection effort for February and the succeeding months due to the tax reform measures the Duterte government is taking that is expected to be felt within the year,” Palamine said.

He said for the BIR, the month of February would be “dramatic” as the effects of the TRAIN law would likely be felt by both consumers and business operators.

“We will have to see the effect before we can judge (the outcome of the TRAIN law) in the coming months,” Palamine said. —Jigger Jerusalem