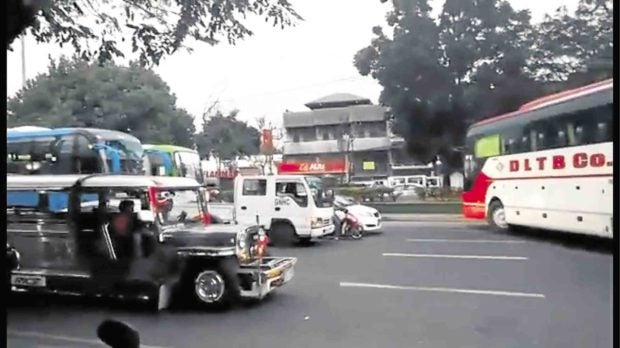 Screen grab from video taken by Arvin Cardiel shows a DLTB bus maneuvering on the road to enter the bus terminal in Pasay City. —VIDEO TAKEN FROM MOCHA USON BLOG

Assistant Secretary Mocha Uson finally put her popular blog to good use after she posted a photo of provincial buses maneuvering in the middle of a busy street, leading to heavy traffic.

Because of her post, the Inter-Agency Council on Traffic (I-Act) summoned on Sunday Del Monte Land Transport Bus Co. (DLTB) to explain its “nose-in, nose-out violation.”

The bus firm is facing charges of obstruction and disregarding traffic signs, I-ACT said in a statement. Each violation carries a P500 fine.

On Feb. 14, Uson, an official of the Presidential Communications Operations Office, shared a video posted on Facebook by Arvin Cardiel showing vehicles stalled in traffic near the corner of Taft and Gil Puyat Avenues in Pasay City while two DLTB buses were maneuvering to enter the bus terminal.

According to her post, this was a frequent occurrence whenever DLTB buses go in or out of the terminal because of the inaction of the Pasay City government.

As of Sunday afternoon, Uson’s post had garnered over 8,000 reactions and had been shared around 3,000 times. Her blog has more than 5.5 million followers.

Orbos, who also heads the I-Act, criticized DLTB in another post which was quoted by the I-Act in its statement.

“Big companies that they are — they nevertheless are the first to blatantly violate the ‘nose-in, nose-out’ policy, thus causing unnecessary traffic,” he said.

Under the policy, buses should go in and out of their terminals with their front-end (or nose) first, instead of maneuvering on roads.

In July last year, nine bus terminals on Edsa were shut down by the MMDA for noncompliance with the policy.

The DLTB terminal on Edsa-Tramo was among the 10 bus companies tagged by the MMDA as having a single entry and exit point.