Paper says China unhappy over US carrier visit to Vietnam 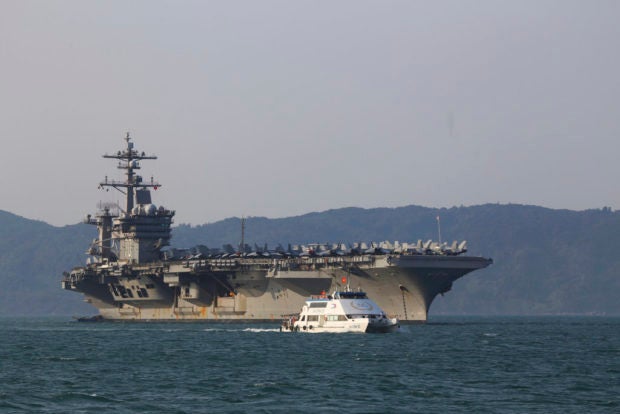 A Vietnamese passenger boat sails past U.S aircraft carrier USS Carl Vinson as it docks in Danang bay, Vietnam on Monday, March 5, 2018. For the first time since the Vietnam War, a U.S. Navy aircraft carrier is paying a visit to a Vietnamese port, seeking to bolster both countries’ efforts to stem expansionism by China in the South China Sea. (AP Photo/ Hau Dinh)

BEIJING (AP) — A Communist Party newspaper says Beijing is unhappy with first visit by a U.S. aircraft carrier to a Vietnamese port since the Vietnam War and watching closely how events develop.

However, the Global Times said Wednesday that the Carl Vinson’s visit was unlikely to alter the balance of power in the South China Sea, which China claims virtually in its entirety and has been fortifying with military structures on man-made islands.

The paper said the visit will “not generate any special tools to pressure China.”

Vietnam and China have extensive overlapping claims to islands and resources in the crucial waterway.

U.S. officials say the port call is a sign of the U.S. commitment to the region and U.S.-Vietnam ties, but say they’ve seen no response from Beijing so far.  /muf