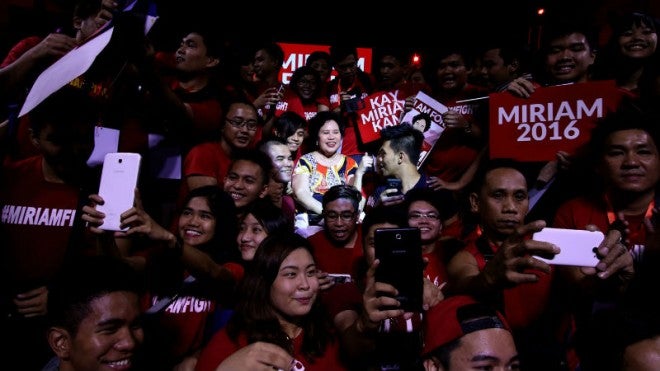 MIRIAM AND ADMIRERS Supporters surround and take selfies with Sen.Miriam Defensor-Santiago during the 2016 elections. This was taken during a sortie at Ang Bahay ng Alumni of the University of the Philippines campus in Diliman,Quezon City. INQUIRER file photo / RICHARD A. REYES

In time for the International Women’s Day celebration on March 8, Sen. Leila de Lima has urged the Senate to recognize and honor eight women, including late Sen. Miriam Santiago, for excelling in their respective fields abroad.

De Lima has filed Senate Resolution No. 669 expressing the sense of the Senate honoring and acknowledging the individual accomplishments of outstanding women, including the overseas Filipino workers who excelled in their own fields abroad.

“The Senate has, in the past, paid tribute to outstanding and exemplary Filipinos,” she said in a statement on Tuesday.

“It is opportune to recognize and highlight the accomplishments of outstanding women who have contributed to the fulfilment of women’s human rights, gender equality, women’s empowerment, and social progress,” she added.

Among those outstanding Filipino women whom De Lima wanted the Senate to accord due recognition are the following:

De Lima said the outstanding Filipino women are “prime movers and achievers” in their respective fields, and therefore, should be given due honor and recognition.

She also urged the Senate leadership to render due recognition to other outstanding Filipino women who have made a difference in their respective fields or sectors abroad, and those who devoted their life taking care of their families.

“Due recognition must be given equally to all our heroic Filipinas who work overseas in different sectors, including domestic services, the healthcare industry, military and police, education, medicine, law, informal economy, religious work, and every women who devoted her life to look after and care for her family,” she said. /jpv