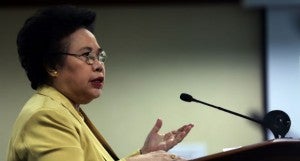 Santiago, author of the Magna Carta of Women and co-author of the Reproductive Health Law, lamented that some of her proposed legislation on women and gender equality remain at the committee level.

“I have written the committee on women, family relations, and gender equality earlier this year to ask that it prioritize public hearings for my bills,” she said  in a statement  on  Friday.

Among her measures pending in the committee is the proposed Child Support Act (Senate Bill No. 403), which seeks to penalize any parent who refuses to support a child.

“This will protect single parents, especially women, from being financially abandoned by the child’s other parent,” she said.

Santiago also filed the Safe Haven Bill (S.B. No. 2457), which caters to women unprepared or unfit for motherhood, while ensuring the safety of their babies.

If enacted into law, the bill, she said,  will allow women to leave newborns with government-assigned safe haven providers rather than haphazardly abandoning them.

The Battered Women’s Testimony Bill (S.B. No. 1558), meanwhile, seeks to facilitate the use of expert testimonies in cases of women subjected to domestic violence while Senate Bill No. 1801 seeks the creation of a task force that will recommend a national strategy to protect women against violent crime.

Other pro-women bills filed by the  senator  are S.B. No. 1751, which will allow women to use their maiden first name and surname; S.B. No. 1771, which seeks to eliminate gender bias in adultery and concubinage in the Penal Code; and S.B. No. 1722, which seeks to establish a Commission on the Advancement of Women in Engineering, Science and Technology Development.