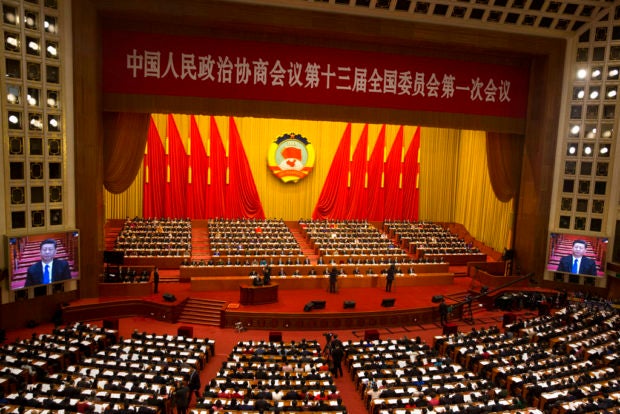 In this Saturday, March 3, 2018, photo, Chinese President Xi Jinping is seen on large screens at the opening session of the Chinese People’s Political Consultative Conference in Beijing’s Great Hall of the People. Xi is poised to make a historic power grab as China’s legislators gather from Monday and prepare to approve changes that will let him rule indefinitely and undo decades of efforts to prevent a return to crushing dictatorship. AP

BEIJING, China — President Xi Jinping is poised to make a historic power grab as China’s legislators gather beginning Monday to approve changes that will let him rule indefinitely and undo decades of efforts to prevent a return to crushing dictatorship.

This year’s gathering of the ceremonial National People’s Congress has been overshadowed by Xi’s surprise move — announced just a week ago — to end constitutional two-term limits on the presidency. The changes would allow Xi, already China’s most powerful leader in decades, to extend his rule over the world’s second-largest economy possibly for life.

“This is a critical moment in China’s history,” said Cheng Li, an expert on elite China politics at the Brookings Institution in Washington.

The move is widely seen as the culmination of the 64-year-old Xi’s efforts since being appointed leader of the ruling Communist Party in 2012 to concentrate power in his own hands and defy norms of collective leadership established over the past two decades. Xi has appointed himself to head bodies that oversee national security, finance, economic reform and other major initiatives, effectively sidelining the party’s No. 2 figure, Premier Li Keqiang.

Once passed, the constitutional amendment would upend a system enacted by former Chinese leader Deng Xiaoping in 1982 to prevent a return to the bloody excesses of a lifelong dictatorship typified by Mao Zedong’s chaotic 1966-1976 Cultural Revolution.

“Deng Xiaoping’s abolishment of lifetime tenure for the leadership and more institutionalized transitions in power are very much in question,” said Li, the politics expert.

Passage of the proposed constitutional amendment by the congress’ nearly 3,000 hand-picked delegates is all but certain. But observers will be looking to see how many delegates abstain from voting as an indication of the reservations the move has encountered even within the political establishment.

On Sunday, Zhang Yesui, the legislature’s spokesman, told reporters that the move is only aimed at bringing the office of the president in line with Xi’s other positions atop the party and the Central Military Commission, which do not impose term limits.

“It is conducive to upholding the authority of the Central Committee of the party with Comrade Xi Jinping at the core and also to unified leadership,” Zhang said.

Chinese authorities have tightly controlled discussion about the move, scrubbing social media of critical and satirical comments. State media have been largely muted about the topic, but the official People’s Daily sought to reassure the public by saying in a commentary that the move did not signal a return to lifelong rule.

“This amendment does not mean changes in the system of retirement for party and state leaders and also does not imply that leaders will have lifetime tenure,” the party’s mouthpiece said Thursday.

Still, a number of prominent Chinese figures have publicly protested the move, despite the risk of official retaliation.

Li Datong, a former editor for the state-run China Youth Daily, wrote that lifting term limits would “sow the seeds of chaos” and urged Beijing’s lawmakers to exercise their power by rejecting the amendment. Wang Ying, a businesswoman who has advocated government reforms, called the proposal “an outright betrayal.”

Many expressed shock and disbelief at what they perceived to be a return to the Mao era, and the massive upheaval, violence and chaos of the Cultural Revolution 50 years ago that has barely faded from memory.

Already, the blanket and entirely positive coverage of Xi in official propaganda has drawn comparisons of a cult of personality to rival Mao’s.

But some analysts note there are a number of key differences between Xi and communist China’s revolutionary founders that mean any major policy failure could obstruct Xi’s ambitions.

“Xi Jinping is not loved and admired the way that Deng Xiaoping was. Xi Jinping is feared within the party,” said Steve Tsang, director of the China Institute at London’s School of Oriental and African Studies.

Xi has also waged expansive anti-corruption crackdown that some perceive as at least in part a purge of his rivals. This has surely won him many enemies, making the prospect of ceding power potentially risky.

Tsang said the party would follow Xi as long as things went well but that any serious economic misstep over the next five years would threaten Xi’s ability to extend his rule.

“I don’t think it’s a foregone conclusion that he will have a third term,” Tsang said.

Xi’s power grab will be seriously tested by how he tackles grave challenges at home and abroad.

Chief among them is slowing growth in the state-dominated economy that is forecast to fall further as regulators try to get rising debt in check by tightening controls to cool booms in bank lending and real estate sales.

Abroad, China is faced with the task of maintaining stability and avoiding the outbreak of war on the neighboring Korean Peninsula, while also managing escalating frictions with the U.S. that threaten to evolve into a trade war.

Some observers say extending Xi’s rule gives him greater authority to address such challenges and carry out his vision of fighting corruption, eliminating poverty and transforming China into a modern leading nation by midcentury. The argument goes that lower-level officials tasked with carrying out needed changes won’t be able to assume they can do the bare minimum and wait for his term to end.

Others say the risk of policy missteps is multiplied because Xi has made it politically risky for people to disagree with him and challenge his unbridled power.

The decision to scrap term limits was a case in point, Tsang said, noting that party leaders must have foreseen that such a move was going to be deeply unpopular, yet seemed unable — or unwilling — to steer Xi away from it.

“What it does reveal is Xi Jinping is creating and deepening a moral hazard that now people will not want to say anything to contradict him, not only in public but even in private,” Tsang said.

“If this is the kind if pattern of policymaking, moving forward, the risk of bad decisions being made because they were not properly debated before they were made is getting higher and higher,” he added.

What has been particularly alarming to many about the proposed removal of term limits was not only the move itself but seeming hastiness with which it was introduced. The Chinese public has grown accustomed to some measure of public debate about new laws or changes to existing laws. Some laws go through three or even four readings, but not in this case, observers pointed out.

“When it comes to the revision of the constitution, how could it be that there is not a significant public commenting process, that there is not a more deliberative review process?” said Dali Yang, a China expert at the University of Chicago. “That’s truly a remarkable contrast.”

Few experts expected China to adopt a Western-style, freewheeling democracy. But a return to one-man rule diminishes the likelihood that China’s one-party system could move — as some had hoped — toward governing with greater accountability through the establishment of rules-based, impartial institutions.

This shows “the one-party system cannot be fully institutionalized. They operate as secret societies; nothing is public,” said Jean-Pierre Cabestan, an expert on Chinese politics at Hong Kong Baptist University.

“He’s kind of a ‘Godfather’ and he will remain the Godfather until the next one comes along.” /cbb